We met through a mutual friend at the Fijnwyn Food & Wine Festival in Pretoria March 2019.
Pierre immediately caught my attention. And even though I managed to hide my interest in him that evening, I kept on stealing a glance at him now and then because he is just the most handsome, tall man I have ever seen. Our evening continued with a great conversation, food, and laughter with friends! After the festival we both went our separate ways, as it had been a long night.
Pierre headed to a farm with the guys, and I had a Spa date planned with the girls the following Saturday. A week later I received a braai invitation from our mutual friend, and guess who showed up? Mr handsome! All I remember is that my heart was literally racing when he walked in. That evening turned out so beautiful because we initiated a conversation for the first time, and our friend later assisted us with contact details to keep in touch, I guess that is what friends are for right? So, I was the one who sent a text first. Two days later we went on an official date that turned into two months, and now we are here, ready to say "I do" and have our loved ones witness the most important moment of our life, it's a blessing!

On a warm Thursday morning, the 19th of December 2019 to be exact, myself, Pierre and friends were having drinks at Midon Pub in Doringbay. I somehow noticed that he was a bit nervous, but I thought it was from meeting up with my Cape Town friends for the first time. Little did I know that he actually had "the ring" in his pocket the whole morning and was planning a surprise proposal, of which I find very special.
After a few drinks at the pub, we then headed to The Jetty restaurant at Fryer’s Cove Vineyard to take photos by their beautiful jetty. And at that very moment, while we were basking in the sun, admiring the beautiful scenery with a touch of the breeze from the sea, Pierre uttered “I love you”. I was filled with emotions because that “I love you” hit me so differently. Before I could I respond, he kneeled down and asked me to be his wife. I was in awe! Everything happened at the perfect time, with the perfect surroundings. My “yes” was not just a response to his proposal but it was an affirmation to the both of us that pure true love does exist. 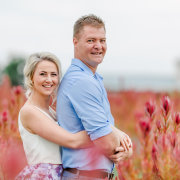 A romantic | A dreamer | An artist

I am a qualified Professional Makeup Artist and Hair Stylist based in the Boland and Overberg area.