Voting has closed for Bride of the Year 2020

Our love story started in a strange which I would never imagine.. I was scrolling through Facebook and Marklin came up as people I may know.. I viewed his profile and I had seen he had his physical address, So I messaged him and told him he is quiet a brave man to have his address there.. He took a few hours to reply saying he would love to know who's his stalkers are and what's so good about him.. We chatted for a few months untill he asked me out on our frist date and a few dates afterwards one day he took me out to the whalf and told me let's take a walk and explore the area.. He jumped out the car and had a bunch of red roses, down his knees he asked me to be his girlfriend.. I was shocked and amazed 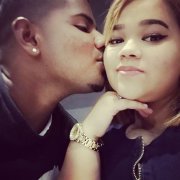