Voting has closed for Bride of the Year 2020

So it is kind of a funny story , we met on a "Dance Floor" ! He was asking me if I wanted to dance with him, "keep in mind I was wearing the most uncomfortable shoes ever " but I said yes! So while dancing he asked me why I never replied to his message on Facebook, at the time I never knew I had to except someone's message on Facebook ☺️ . So the dance ended and I went back to my friends.
The next day I accepted his message and we began to chat but not that much , and a week later I was at a get together and needed an escape so I messaged him, he picked me up and we went out together, had the best night, made impulsive decisions together and even went to a farm and slept there , we drove back the next day and got lost , with an empty gas tank looking for the nearest town for a garage to fill up, we laughed and talked and he complemented me even though I had the same clothes on , last nights makeup and messy hair , he still made me feel beautiful, so we did make it to a gas station "just in time" and he drove me home, so the Sunday night he asked me if he could come and have a cup of coffee Monday night, and I couldn't say no, so the Monday after work he came and visit and the next day and the day after that and every day after that , and I couldn't be more happier ! It was definitely ment to be!

The proposal happend 06/07/19 the day of my birthday.
The day began like any other Saturday, except I had a teachers meeting open day that morning so we rushed there at 8 am the morning, it was a very cold morning in our little town Kroonstad .After the Meeting we went to my mothers house because my uncle was visiting her. It was a nice but ordinary afternoon.Went home at 16:30 and watched a movie together and took a nap , at 18:00 shawndre started rushing me to get ready, I knew we were eating out but I didn't know we were going to a fancy place , We went to Arcadia Guesthouse Restuarant, he made reservations for us , I felt so special! The table was made up with candles and champagne, It felt like heaven on earth, so later the night we ate "chicken snitchel" they were playing the most Romantic music , it was French music. As it was getting later I felt a bit disappointed because I had a feeling it was going to be a proposal and nothing happend , he was acting tired and wanted to go home .I tried not acting disappointed but he kept asking what's wrong and I kept saying nothing and I thanked him for the beautiful evening, and he asked me again so I replied " I thought this was something bigger, and then he kept asking me what I thought it was and while talking he was busy in his jacket, it looked like he was scratching himself but as he took out that little black box with white lines I started shaking, he bend down on one knee and asked me if I would be his wife , he wasn't even done and I said Yes , It was a warm feeling that came over me , a feeling I've never felt before, i was blown away! He made this evening so memorable i will never ever forget it ! 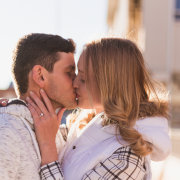