Well we were the typical "Office Cliché", and we met while working together.

It was easy for us, as we had already gotten through the "get to know you" phase of a relationship, we moved in together within 3 months of officially dating. MANY warned against this... but, well, when you know... YOU KNOW! Funniest story Geoff always tells people, is I came as a package deal, as I brought my 2 cats with me to the relationship - so it was ALL or nothing, allergies and all... hahaha.

And the rest, as they say is HISTORY... 3.5 years into our relationship, going strong, and about to enter the best journey yet!

Hehehe - well this was as romantic as it gets!

We were in Kenton-on-Sea... probably the place Geoff has the best memories growing up from, and I could not WAIT to experience it myself!

He started the day off on a very romantic note, took me on a boat ride on Chobi River to Mansfield Game Farm, there we went on a Game Drive and a nice "Purely South African" braai for lunch. We then took the boat back to the harbour and Geoff had an amazing SPA day prepared at the hotel at the Harbour - I mean... YAAAASSS!!!

After an amazing hour and a half of pure bliss with a full body massage and more... Geoff asked me to wear a nice dress for dinner as it was a fancy restaurant!!! I should have been suspicious at this stage as there aren't many (if any) fancy restaurants there at all. But who was I to know that!

So I got dressed in his favourite dress and we were off to "dinner". While on the drive to the grub, his parents called to say that they were running late, so why don't we go for a walk on the beach? By this time, I was hungry, and didnt feel like going to the beach dressed as I was! But off to the beach we went - as he was pretty persistent about it after all!

While walking along the beach past all the regular and casual beach-goers, I noticed EVERYONE... and I do mean everyone... was staring at us while we walked past! I thought this rather strange, but chalked it up to the fact that we were quite formally dressed. I even passed a comment about how I thought we were too over-dressed for the beach!

Anyway, we carried on walking along the beach, and he then decided to cut along the sand and go a different way! Again... I wasn't to know any better! As we approached some sign boards - which I assumed were for some game kids were playing - Geoff dropped his shoes and walked on. This was odd, but I then carried on walking, and looked at the boards which read "WILL YOU MARRY ME?". I whirled around to find Geoff down on one knee with the ring...

At this point, the entire beach of people erupted in applause which caused Geoff to forget his entire well-prepared speech! Anyway, he got the words out, I accepted, and again had more cheering!!!

Next thing his family came running out from behind a dune they were hiding behind, and MY MOM came too - whom he had flown down for the occasion. All-in-all, I think he did an amazing job in spoiling me, and making the day one to be remembered for years to come! 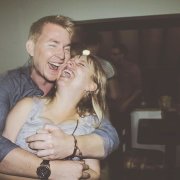 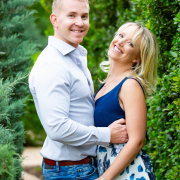 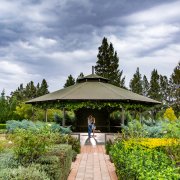 Café Fleur & Cor de Rosa is no ordinary flower shop – it is a hub of bridal activity & event planning.