We had our wedding at the beach , which is my happy place ALWAYS! There is just something soothing about water.

When I was about to walk down the isle, the first thing I saw was the ocean! The entrance (the beach deck) to where we were getting married was at the top. So before I could see the guests and my husband waiting there, my first view was the ocean. The tranquility I felt could not be described in words! I just knew it would be a beautiful, perfect day indeed!
Then I saw my husband looking at me with those loving eyes! My day was made!

We are not a young couple and we both have children from previous relationships. It was super special to have all our kids being part of the entourage. Both our kids gave us the rings when it was time to exchange the rings. It’s such a blessing to have children from both sides approving and in full support of the new union between their parents! That moment melted my heart!

When we said our vows and we were pronounced husband and wife, my husband said “we can leave the party now, I have my wife and need nothing more “. I felt his love. We kissed and embraced for long, we belonged to each other!

We actually had two places we went to for honeymoon. The first one was immediately after the wedding, on our wedding night. It was at a place in Mtunzini where our wedding was held; it’s called One on Hely guesthouse. We were treated like the queen and king we are! Unfortunately we couldn’t stay for long as we had to go to attend to some family issues which were part of the wedding. We stayed for one night and spend a few nights after in Durban, meeting different family members, as part of being officially introduced to the family and formally meeting the elders of the family.

Then we were off to Drakensburg (my husband loves this place for its weather and I love it for its nature) to celebrate the last days of our honeymoon. We booked into a small, homely B&B called Erin B&B. They made our honeymoon extra special, giving us extra attention! They definitely made a lasting impression on us. We shall visit them again!

There we fell in love with each other all over again, felt like we were 16! 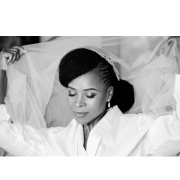 For my hair I wanted a natural look, something I know suits me well and goes with my personality. So I used my usual hairstylist who has been doing my hair for years. I was happy with how it came out. Perfect!

I have a friend who is based in Cape Town who has a niece who is an upcoming make-up artist. After I told my friend that I was getting married, she called me a few days later and told me that her niece has offered to do my make-up for free as wedding gift. I received the love and support from both of them.

I knew I wanted a wedding dress that would accentuate my beautil figure, so I chose mermaid style. I have a younger sister who is a fashion designer. I saw a dress online and she was confident she can make it. We went to buy the material. The material turned out to be one of the most beautiful and expensive materials I ever bought. I was in love. I wanted a long vail. My sister could not believe this dramatic side of me as I am usually a conservative person. After the material was bought and we have agreed with my sister on how much she would charge me to make it; my mom called me and told me she would refund me the money used to buy material and pay my sister for making the dress as it was tradition that she must buy me the dress. I was deeply touched by this gesture!

For my lingerie, my younger sister, out of the blue called me and announced that she had decided I will wear white lingerie for my wedding, and its a command! I laughed and asked her what colour did she think I would go for? Of course white it would be! She was also relieved! So I bught myself the lingerie. She also announced that for the hair accessory, I mustn't buy it, it would be my gift from her. How could I say not to that? The condition was that I must just tell her what I liked so she would buy something I approved of. So we went shopping together, and that included the gutter, it had blue clolour, to take care of "somethin blue" and bought the hair accessories as well.

For shoes, after searching for weeks not finding something that was speaking to me, we eventually found a beautiful pair. What a relief. Now I could get married- lol!

We got married at Mtunzini beach for the matromonial service and for the reception,were at Mtunzini forest Lodge. We had guests from out of KZN, from Gauteng and Cape Town. Some stayed at the Forest Lodge, while others booked at different hotels and B&Bs in Durban. Some were locals in Durban so drove from their homes in the morning as the wedding started at 11am and the drive from Durban takes about 1hour 30 minutes.

My maid of honor took it upon herself to get me ready for the weding. She paid for our facial peels at a spa in Joburg Also a week before the wedding as a thank you to her for taking care of me (I cant just take and not give back), I took her and me to a spa in Krugersdorp called Soulstice Day Spa, where our bodies were also treated to some beautiful treatments, getting ready to glow on the big day!

I am already a very active person, doing long distance running I was already in shape, so I kept doing what I always did. I added a few dumbell exercises to ensure that my back looked even more toned for my boob tube dress.

My sister helped me to arrange fresh flowers and centerpieces. She made the table runners, and my husband arranged table and chairs. It came together so perfectly. It was stunning!

The suits were bought from a shop in Jhb for my husband and sons. The groomsmen hired their suits in Durban. They all looked so gorgeous.

My friend who wa also a briedsmaid had travelled to Nelpruit, Mpumalanag and saw these beautiful blue dresses. she tried one on and sent me a picture if I liked it, since she knew I wanted them to wear blue dresses. I liked it. Then we asked the other bridesmaids, sent them a picture and they all loved it. One of the bridesmaid is based in Nelspruit, so they called her to come fit the the dress. She is almost the same size as the third bridesmaid (my youngest sister), and they bought for all of them. Dresses looked perfect on them on the day

My husband's brother is a pastor and my hubby told me long time ago that he would like him to officiate at our wedding since he was also licenced. We went to have a meeting to formally ask him and he was hononred and agreed.

My photographer is a friend to my youngest siter and she is now part of our family. She also captured our traditional wedding (umembeso) earlier on in the year. We loved her work and we knew she would also capture our white wedding. Her cpmpany is called Mix Pix Photograpery. I asked for a referral from her for the videorapher, and she referred me to Leigh Eksteen Photography and Videography.

My younger siter who is a fashion designer is very talented with her hands and she helped me coordinate my wedding. Her company is new she decided to launch it a few months ago and it is called Blaque Eye Creations, where she does fashion designing, events management and catering.

My wedding showed her how talented she is and how much can perform under pressure. She is proudly self-employed now and is loving it.

We didnt use a special provider. For the entourage we arranged with close friends who have Mercedes Benz to transport us.

Family and friends really came through for us and saved us money here!

A family friend has a catering company called Mangi's cateres based in Durban. We knew we enjoyed her food and that is how she was chosen. she did an excellent job, guests were raving about her yummy food, and there was plenty!

We didnt use much stationery. We printed the programme using our photo from the traditional wedding as the background amd took it for printing. We had the backdrop as well as the welcoming borad that was designed with my input and the pprinter called Inkazimulo Printing and Signage based in Newcastle.

We didn’t take dance lessons but had a simple routine for my husband since he can’t dance to save his life. He didn’t disappoint on wedding day and forgot his moves (as expected). I punished him by showing him how to “shake what your mama gave you” - lol! We had fun nonetheless!

We had the DJ based at Mtunzini to help us with the music. His name is Garth Green who works with other DJs in partnership. They kept our guest dancing like it was a party when we had to disapper to take susnset picures, they didnt even miss us. We hear everyone was on a dance floor, and it was the best party they have even been to!

Towards the end of the ceremony (when we were there now-LOL), we had such fun dancing till the end. Crowd gathered around once more and danced till the end. I’ve always visualized how we will dance and have fun, taking turns on the dance floor; amazingly our guests gave me exactly what I was secretly wishing for in my big day! Indeed dreams DO come true!