On the 29th July 2016 I was at a Karaoke bar with some friends, when I was walking down the stairs I bumped into Sean, it was nothing short of love at first sight. We spent the next 24 hours just talking to each other and haven't stopped since, we started seeing each other every weekend, and every free day, and the rest is history as they say

When Cat Stevens announced he was coming to Cape Town, I saw it as a sign. This is an artist that is very close to both of us. We'd been dating for almost 2 years by then, and I knew that I wanted to marry him. I arranged us tickets for the show, and went out to find a ring. I told a few close friends joining us that I wanted to propose to Sean, they were all so excited, and offered to film the proposal. I contacted Showtime management and explained that I wanted to propose to Sean and asked if they could get Cat Stevens to sing "Moon Shaddow" they said they would try.
At the event I met a few friends who worked on stage at the event and told them my plans too, they also said they would try ask him to play our song. (someone even offered to get me on stage to ask him in front of the audience, I declined because I wanted the moment to be between us)

With the ring in my top left pocket and my (future fiance) boyfriend on my right we sat and watched the show (I was a nervous wreck). Around half way through the concert I thought Cat Stevens wasn't going to sing Moon Shadow, and just as I was about to give up. Then he played the song. Sean put his left arm around my shoulder to hug me, and I thought that was perfect timing, I slipped the ring onto his ring finger and turned to him and asked: "Will you be my forever man?", he was so surprised and wasn't sure if it was real, and then said "Yes!" 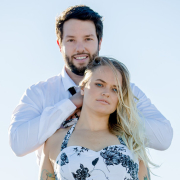 Your special day in the beautiful, idyllic garden setting with a Gazebo on the water. The Ceremony Area is surrounded by romantic Lavender Field and mountain-meet-vineyard the...