Getting out of the car infront of the church ready to walk down the isle. Loved seeing all our family and friends mingling together from all over and then heading off to our sunset photo's 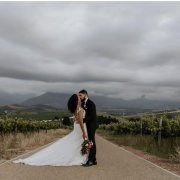 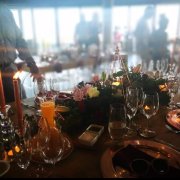 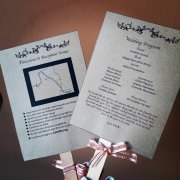 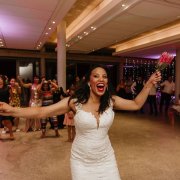 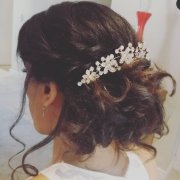 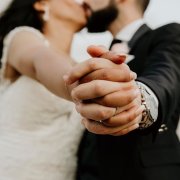 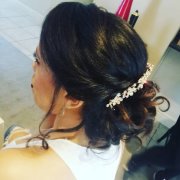 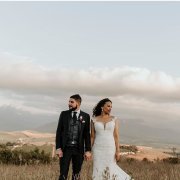 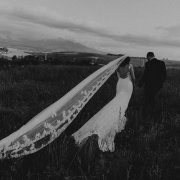 I went for something modern with a bit of a slight vintage feel and minimalistic. The dress is Viloa Chan which I purchased at Bride & Co within a week I had to purchase my dress as I was leaving to be away for work for 6 months. The Bridesmaids chose their own style of dress which was then made by mh_presents_danni. My shoes were from Aldo whereas my bridesmaids found their perfect matched shoes at YDE. The groomsmen suits were hired from Bride & Co. Myself and the bridesmaids accessorize were from Lovisa. Hair was done by Charnae_hair03 who also happens to be my sister. I opted for an up style for the first part of the day. When it came to the dancefloor I literally let my hair down. Make up was provided by Manabosch from Mana Makeup.
Our photographer for the day was Radzphotpgraphy. We chose the venue of Landtscap for the simplistic colors of the venue, breathtaking views and amazing food. Decor was provided by Magical Blooms who brought the modern , sleek, warm and slight vintage feel to the venue we were looking for.

We chose Landtscap located in Stellenbosch for their simplistic style, breathtaking views and amazing food for our reception. We got married in the NG Moedergemeente Stellenbosch which is the second oldest church is South - Africa. So it was a short ride for our guest from the church to the reception area.

Coming up to the wedding I followed the 28 day diet to shed the last few kg and cm's and did some cardio by alot of walking and stressing that all goes well on the big day.
My beauty Regime consist of doing my own facial scrub with honey and sugar followed by L'occitane shea face cream.

The only hiring we did was the elements on the tables and the mirrors for the menu and seating plan. This was done by Lezania Foster from Magical Blooms.
We also had some lawn games which guest could enjoy while we went off to take our pictures and also for guests to get to know each other. The lawn games were hired from Naomi who owns Fairylight Events in Bellville.
The venue provides tables, a choice of 3 chairs you can use for your reception and lounge chairs for the outside deck while your guests enjoy their canapes.
I also has a kids corner created for the children as most were under the age of 6. The children were them allowed to take any of the games which they liked home with them.

The groom bought his suit in his home country and the groomsmen hired their suits from Bride & Co in Canal Walk.

I had 4 bridesmaids. My 2 sisters and 2 friends. The wedding colors were Rosegold as this is one of my favourites and also burgandy which is the colors of my husbands home city flag. The bridesmaids chose their own designs so that they may feel comfortable in what they are wearing. Their dresses were then made by mh_presents_danni.

This was our second wedding day as for us to be legally married we had to do it in my husbands country first. We therefore just had a religious ceremony done.
We were blessed by my cousin doing the ceremony for us as he is a priest.

We chose Radiefa Peters who owns her own company with her husband called Radzphotography. We did not have a photobooth. We opted for Radzphotography as she has been our photographer at a few of our events and love her work. She loves capturing the in the moment photo's which makes for a.much more relaxed day and beautifull photo's of you and your guests. Imaadgriffiths was our videographer for the day. As we had such a breathtakingly beautifull view he also brought his drone with for our day.

We planned most things ourselves. My sister is a event planner and also one of my 4 bridesmaids who also took the role of planner. We also had the help of the planner at the venue of Landtscap which is Tammy van Jaarsveld with logistics on that side.

We had 2 white Toyata Fortuners which were provided by friends of my father.

We chose a buffet to table style. This allowed guest to interact with each other around the table. The food was provided by the venue and it was amazing. The meat literally fell of the bone.
The cake was made by Ayesha Davids from Strandfontein. We opted for a 4 tier cake with 2 tiers of red velvet and 2 tiers of chocolate. Our wedding cake was then served as dessert.

My sister did the wedding program for us which was handed out to guest at church. They could also use the program as a fan.
We chose not to use alot of paper for the table plan and opted to do our menu and seating plan printed on two big mirrors which were placed at the entrance at the reception. This was done by Lezania Foster from Magical Blooms.
Our invitations for the day which was inspired by us traveling alot was in the form of a passport done by Secret Diary in Brackenfell.

Our alluring invitations and social stationery is for those who truly desire to set themselves apart by making the perfect stylish statement!

With such a short amount of time we choose to go with a DJ. We did not have time to take dance lessons due to us hardly being together before we took our vows as my husband was at work abroad. Good thing we kind of know how yo slow dance.
We used the Services of Maximum output as one of our friends gave him as a reference.
We also opted for some games at our reception as a tool for everyone to engage and get to know each other. The guys were called up to play show me were the guys would introduce themselves and how they know the couple and then they had to dance it out and.the crows got to pick the winner.
For the ladies we chose the game fetch me where they had to fetch an item and run back to get a seat. The last lady sitting wins alot like musical chairs so they has to get items such as a pen, mens pair of shoes,R10 note, a tie, a mens blazer etc. We then ended of our games with me and my husband playing the shoe game. We really just wanted everyone to have fun and get to know each other and have the feeling that we are indeed one family now.

Our alluring invitations and social stationery is for those who truly desire to set themselves apart by making the perfect stylish statement!