Well a friend of mine came down from JHB and I was dying to see her because it had been ages, so we made arrangements and she told me she would be there as soon as her husband and friend Colin had finished diving.

Later that afternoon there was a hoot at the gate and I went to let them in and thats we met.

He got out of the car and didnt take his eyes off me, Taryn was desperate to see my bunnies so off we went to find them and he followed us, and mentioned my bunny earings and Taz told him I'm the reason she loves bunnies so much.

We then went out a few times and his advances were really clear and the night before he left to go to jhb he kissed me.

Then 3 months later he found a job in kzn and moved here for me and the rest is, as they say, history

Colin ushered me off on a beautiful weekend in the Drakensberg and when we arrived the weather wasn't too fantastic but we decided to go on a picnic anyway.

Nestled in a peaceful quite place by a lake he had painted beautiful heart chalk boards and we were playing a guessing game and he aked me to write someething that I wish for the future and we would show eachother, he made me close my eyes and then when I opened them his board asked, will you marry me?

Wow how do I even start listing our memorable moments of our special day, I think every moment was so special and meant the world to us.

Our guests were made up of close friends and family of which everyone is special and made our day amazing, some traveled from different parts of the contry and some traveled in from overseas to share in our special day.

I loved the process of DIY'ing our wedding with my husband and eventhough it was not easy it brought us closer and made all the finer touches more special.

The venue and the staff made our day effortless and relaxed and the help of some of our guests added to making it run smoothly.

The biggest stand out was the moment the bag pipes started paying and i walked down the isle and it felt like everything dissapeard and all i saw was my handsome groom and all the love in his eyes.

My husband wisked me away on my first ever over seas trip on an epic honeymoon where we dived and shopped in Dubai, and breathed in the sights, smells, tastes and sounds of Italy. 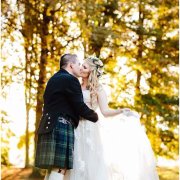 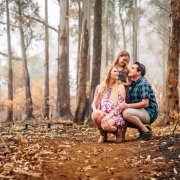 My wedding look was definitly on the boho bride trend lines, the makeup was done by my best friend and Bridesmaid Taryn Morgan who owns The Beauty Guru in Scottburgh, our hair was done by my sister Biba Daubeny who owns Section 2 in JHB, my wedding dress was a stunning dress from Bride and Co. my shoes and accessories were all done on a budget and if I could DIY them I did.

To be honest i never really jumped on the band wagon of all the bridal diets and bridal beauty stuff, all I really wanted was to enjoy our day with our friends and family celebrating the start of our new adventure.

I went full on DIY bride for my wedding, my husband and I made almost every element of our wedding decor, from the invites to the arbour to the bunting to the signs and banners. We did have some decor included in our wedding package from Lythwood that we made use of.

We hand made hundreds of paper roses and origami cranes for the decor and this was set atop a log with jars as candle holders surrounded with moss and fairy lights, our table runners were made from the pages of old books and the wedding favors were hand made bunny soaps and home brewed craft beer.

We rented a beer tap and craft beer from Robsons Brewery for our guest to enjoy.

My husbands whole family is Scottish so he and his groomsmen wore kilts, Colin bought his kilt from Scottland and we rented the rest of their outfits from Rob Roy in JHB. I also found the gents cufflinks with their inital on them.

I had shirts printed by Shindig with a logo of my own design for them all to where while they got ready and made them each a grooms thank you box filled with theings we thought suited their personalities.

My bridesmaids wore stunning lace off the sholder dresses in Navy made by Hoiden Bridesmaids.

I made them each a gold leaf belt to tie in with the gold and navy colours in our forest theme. I also made them flower crowns out of the same paper flowers we made for the decor. I made my daughters flowergirl outfit from scratch as well as her flower crown and I got her pretty gold glow in the dark shoes from Mr Price.

Our Marriage Officer was a pastor at our church and he is the most amazing person, he made our ceremony fun, funny and light hearted and his name is Ferdie Warwick, i would totaly recommend him to anyone who is looking for a marriage officer.

Wow how do I even explain the most amazing photographer ever.....

Lauren Setterberg captured every moment of happiness i could have wished for, she also did our engagement shoot and when we first met her we had an instant connection. she is just amazing.

Danelle from Lythwood Lodge was an amazing help and delt with all of my insane queries and requests and her team did all the set up on the wedding day.

Lythwood Lodge and their amazing chefs and cooks handled all the food on the day, they created an a stunning spit braai with all the trimmings and sided and even catered specially for my vegitarian sister and photographer.

I did all the designing and my Husband and I watercolour painted all the paper and the lovely Ladies at Shindig did all our printing for us.

We had the DJ worx team do all our music at the reception, we didnt do any lighting or dance classes we just enjoyed the moment