Walking down the aisle, I looked in my now husband's eyes and fell in love all over again! We were so emotional. When we read our vows to each other, Flip looked me in my eyes and swore with tears in his! He absolutely made the evening when he called my daughter to the front during his speech and promised to her the same vows he did to me and promised to love and protect her as his own! All the guests were in tears! This was the most amazing and emotional day of our lives and I wouldn’t change a thing!

That moment when you as a couple realize that there is still so much of our own country we need to see and choose to have our honeymoon in one of the most beautiful and mesmerising places om earth - Hazyview.

We got engaged by river side at the beautiful Summerfields Rose Retreat and Spa and fell in love with the lush woods, trees and mountain views so we decided to spend our few honeymoon days here!

We had 3 nights in the luxurious 5-star Timamoon resort. This sexy hideaway is set up high in the hills and surrounded by beautiful forests. The Moroccan themed lodges are so romantic and private we did not want to leave!! The food was one of the best experiences we had and felt a little disappointed with my first home cooked meal as wife!

We both work full time and even though a little rest was needed, we spent every minute enjoying each other's company and all the adventure sports! The Areal cable way was epic! 1.2m of mountain, jungle and river from as high as 30m! Quadbiking like a pro through the macadamia nut farms and Rocky Mountains where we stopped at a stunning little waterfall! Geckoing with the most fun guides from Induna adventures through the Sabie river and even made a 9m jump into the river! We ended our last day with a wonderful elephant interaction at a The Elephant Sanctuary where we met Kitso and Casper who are both rescue elephants from the Kruger.

What an amazing experience all of this was, as I was able to share it with my best friend! 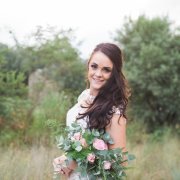 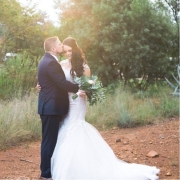 My dress was a design from Oksana Mukha. This was my dream dress and I could only wish to have had a stunning gown like this one! I found a photo of this dress online, not knowing who the dress belongs too and walked into every possible bridal boutique hoping for something similar. I eventually settled for a dress but wasn’t completely happy. My mom convinced me to continue looking for my dream dress. And I found the exact dress at Bridal Room in Pretoria. Melissa was just as excited as I was about the story and I even got the dress as a rental for less than my budgeted price! Proving that persistence pays off.

I am a teeny bit taller than hubby so I had to wear flats. With pump or sandal like shoes not doing my dress any justice, it was quite a struggle to find the perfect pair! I actually found them by luck while out shopping at our local mall. I walked passed Forever new and found my Cinderella slippers on a black Friday sale.

Hair and make-up was done by two experts in their field! Candice and Cherise from Blink. They made my bridesmaids and I look stunning! My hair was long with natural loose curls in a side pin and make-up even more glamorous!

My perfume, Dahlia Divin by Givenchy was a gift from my mom for my kitchen tea.

All the hair accessories and jewellery for myself, my daughter the flower girl and bridesmaids were bought at Lovisa. I had tear drop earrings and with the dress having so much detail, I only had a small hair piece and diamond bracelet.

Bridal Room is a boutique that offers a unique approach to helping the bride find her perfect wedding gown. With staff having the knowledge and experience to find a gown in the...

Motozi Lodge was our wedding venue. With the amazing food, friendly staff and lush gardens, Motozi was perfect for is. Based in Harties, it was close enough for all our guests to travel. The lodge has guest accommodation which we fully booked for our friends and family.

I went for a monthly Nimue bridal treatment at Med Skin. What an amazing experience! Using a facial starter pack and ending the night before my wedding with a regime that included a Nimue Face Mask and eye gel for myself and the bridal party. Woke up feeling rested and healthy.

My maid of honour and I joined a Fitbox class which is so much fun! We attended class 3 to 4 times a week and it really made a difference. I actually fit into my dress perfectly. It was really fun being able to do this with Su-Lette, my Made of Honour, sister-in-law and close friend.

As a birthday gift, I received a home tooth whitening kit. I had to treat my teeth twice a day for 30 minutes from about 2 months before the wedding. It is a professional whitening kit from my dentist and after just a few days I could see a huge difference.

Shabi Sheek is apparently the word, I love a classic wedding look with crystals and white roses and I also liked the idea of having a rustic look but when I started planning our wedding everyone was doing rustic. I fell in love with the rose gold and white but, again, I wanted just a little something different. Even though I promised myself that I would never be a Pinterest bride, that its exactly what it was. A Pinterest wedding. The colours were Gold, Navy and Blush. The flowers were blush pink roses with Eucalyptus leaves. We had wooden rectangular tables with sequin gold and navy runners. Each table had wooden boxes with roses and greenery and lots of candles.

I had named each table with an Afrikaans word, i.e. "Liefde" (Love), "Vreugde" (Happiness), etc. I made the table names and seating plan myself.

Somehow "hearts" worked its way into the theme - this was never planned but for some reason, we ended up having hears in many aspects of our wedding, invitations had a little wooden heart attached with a piece of string. Each table had different shaped small wooden hearts leaning against the flower boxes. even the seating plan was shaped like a heart. Not something we intended but it all looked perfect in the end.

They say, don't fret the small stuff (they apparently know, whoever they may be). But, the one thing so many of our guests said, was that the really appreciated the attention to detail. We are traditionally a "very" Afrikaans family. So, we decided to make sure the entire wedding is translated in Afrikaans. From the Menus (Spyskaart) to the meat - Sirloin (Lende Beesvleis). The table names as mentioned before were all Afrikaans inspirational words and even the songs we chose for each activity were all Afrikaans, with the exception to the song I waked in to the chapel too.

We made little signs for the bathroom that said "Jy lyk oh so mooi, die dansvloer wag" (you look oh so pretty, the dansfloor is waiting) in the ladies room and in the gents: "Dis 'n kuns on te lyk soos 'n Prins" (It's an art to look like a prince).

Our sweet table was the highlight in the room apparently. Even though the music was amazing, more people were eating than dancing. We had a doughnut wall with the doughnuts coloured to the theme of the wedding. There were various labelled sweets which looked stunning.

The venue included all cutlery and golden under plates in our package so no other décor rentals were needed.

With Hubby really wanting input into his own wedding, I sort of let him handle the suits for the groomsmen and himself. However, They had the suits made at Oriental Plaza and I made sure all the groomsmen had a picture and knew what colour the suits should be. If I hadn't done that, they could possibly have worn red suits with purple ties. Ok maybe that to that extreme, But try to explain to any man what the difference is between Khaki and Tan.

The bridesmaid dresses were made by a dressmaker. Again, we got inspiration from Pinterest. Different styles of Lace tops with tulle skirts, rose gold sandals and accessories.

These girls for the stars of the show for sure! They looked stunning and really made the entire experience one I will always remember and cherish.

What an exciting team this was! Zeone at June&July photography captured our engagement shoot and it was beyond amazing! I could not wait to see our wedding photos. They are such an energetic team, even our guests enjoyed them. They make you feel so comfortable and relaxed.

We planned our own wedding but with some help from family and a lot of the décor being done by CarinaExclusive Events, planning our wedding was a breeze. I also used the SAWeddings check list to detail my own and it worked perfectly.

We got ready at the venue and were there from the night before but as a gift, family of ours offered us their Black Convertible Mustang as a wedding car. My dad was ecstatic to drive me down to the chapel in this monster!

The food was amazing! Motozi Lodge did all the catering for our wedding! The guests still talk about how good the food was. We had the standard Motozi Classic Manu which is in Afrikaans culture "regte boere kos"..

With the Canapés during the cocktail hour (While the wedding party took photos) they served cheese, crackers and pates and we supplied our own biltong and drywors.

For starters we had a Bacon and Cheese Quiche.

Mains were buffet of rice, gravy, roast chicken, beef sirloin, potatoes, spinach and yummy pumpkin fritters like only your granny can make them.

We removed our desert from the menu (replaced it with the canapés) because we had the doughnuts and sweet table and also had a delicious ice cream cake for our wedding cake.

Vision Hive. What an angel Janet is! She really went out of her way to ensure everything is perfect. From invitations, programs, menus, guest book and even my naughty little boudoir album for my husband.

We actually didn't take dance lessons. Again, with us being Afrikaans, you would think we know how to dance. We don’t.

The DJ (AMA Promotions) also received so many compliments from our guests and there were always people on the dance floor.

Bridal Room is a boutique that offers a unique approach to helping the bride find her perfect wedding gown. With staff having the knowledge and experience to find a gown in the...