As it was a surprise elopement with only a few close friends and family members, I did not have a kitchen tea with them prior to the weekend. They surprised me with a lovely breakfast and kitchen tea the morning of the wedding at the beautiful Meade Cafe in George. Such a kind gesture.

Francois and I decided to have the first look prior to the ceremony. I met him between the vineyards and the Outinqua mountains for a special moment alone.

The beautiful ceremony with only 16 of our closest friends and family in the vineyards of a wine farm that we've been visiting since we started dating.

Francois and I are big wine lovers. I therefore had a wine label made by Paper Heart Illustrations that represented us on our wedding day. I wanted to label a wine bottle of the farm and have the guest sign the bottle as a keep sake for us. The winemakers gave me such a special bottle of wine that was the farm's anniversary wine that was not yet released and was bottled in the year Francois and I started dating.

Three weeks prior to the wedding, the devastating fires ripped through the Outeniqua pass and the farm on which the ceremony was held. I was so nervous about the photos as the surroundings were no longer as green as it used to be. However, our photographer was so calm about it and ensured that the photos would be beautiful, which it certainly was.

We went on a short getaway for 2 days to Oubaai Hotel Golf and Spa where we relaxed, had couples massages and enjoyed the time alone. We've also planned a belated honeymoon trip next year April 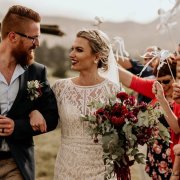 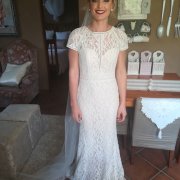 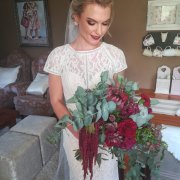 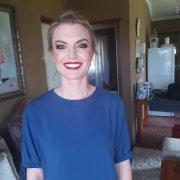 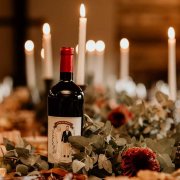 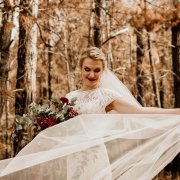 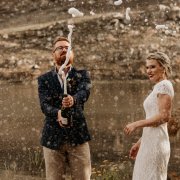 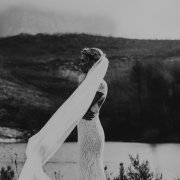 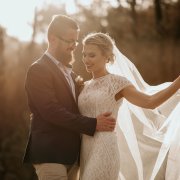 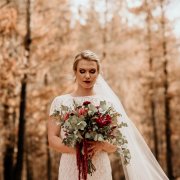 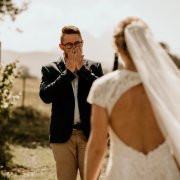 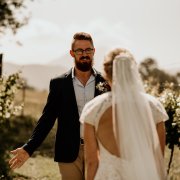 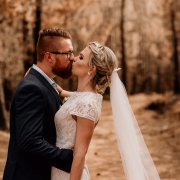 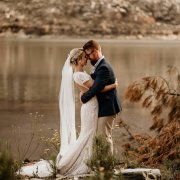 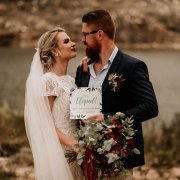 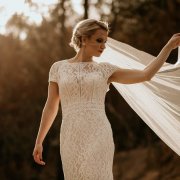 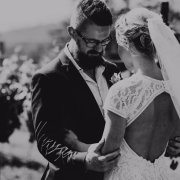 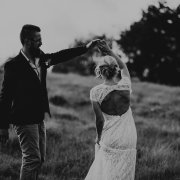 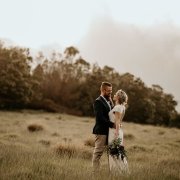 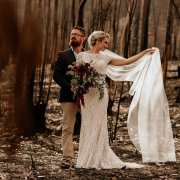 I wanted something different as my dress was so unique. I tried the dress on almost a year before we set a final wedding date, loved it but moved on. Then a year later when we set a date, I knew I had to find that dress again. The full lace dress fitted like a glove. It was so beautiful and exactly what I wanted to wear when I married my best friend. The dress is from the Enzoani Blue collection that I purchased from Lorette Designs in Port Elizabeth.

I wanted a soft and easy look for my hair but a bold lip in terms of make up. My make up artist got it perfectly. She knew exactly what I wanted. The bold lip would also modernise the lace wedding dress. My make up was done by the very talented Maryke from MF Makeup Artistry.

In 2005, a new bridal collection emerged and quickly rose to compete with top brands by merging traditional and modern European styles into exquisitely hand crafted gowns.

It was Francois' 25th birthday Friday the 30th of November so we initially invited everyone on a weekend getaway to celebrate his birthday. Little did they know that they would be part of an intimate elopement. We told everyone about two weeks prior to the wedding. We chose Herold Wines, in the Montagu Pass for our celebrations as we'd been visiting the farm since our first vacation together back in 2013. The wine farm has the cutest cottages on the farm where all the guests stayed. So we had a weekend of celebrations starting with Francois' birthday and ending with a farewell breakfast on Sunday morning, everything planned by the wonderful owners of Herold Wines

I've always had a pretty good exercise regime so I did not do anything extreme. I did however do the 12 week shedding for the wedding programme for some extra motivation.

I had my nails done in Port Elizabeth by Kristy Tait from the Fountain Hair, Beauty and Aesthetics

We wanted something that represented us. We love the outdoors, wine and cheese platters!! So we decided to do minimal decor as the venue was rustic with the most beautiful wooden tables and wooden venue finishes. The venue had soft lighting so we added candles everywhere. We had candles in home made holders on the tables. We also added candles in used wine bottles around the table for a romantic feel.

We wanted minimal flowers that fit the environment. We therefore did greenery with beautiful Sylvia proteas. I had the most striking bouquet with proteas with wine red Amaranthus/celocia, burgundy carnations and seasonal
greenery. The flowers were done by Rudolph from Rhubarb Flower Company in George.

For the intimate ceremony in the vineyards, we used small logs as seating to add to the outdoor and informal feel

Francois wore an informal suit consisting of a separate pants and jacket purchased from Woolworths. His "vellies" we purchased from Duesouth actually a few years ago. I gave him a watch from Fossil as a wedding gift the morning of the wedding.

As we had such an intimate wedding, we decided to not have a wedding party. All our friends and family assisted where they could which was so much more special.

As we had such an intimate wedding, we decided to not have a wedding party. All our friends and family assisted where they could which was so much more special.

Our marriage officer was Willy Schmidt from Faithwalk Ministries

Our amazing photographer was Talita from Inka Photography in Cape Town. We saw her photos and absolutely fell in love. Her style was so different and perfectly suited our vision.

We decided to not use a videographer

Cape Town based Wedding and Elopement photographer, documenting love in its most honest forms.

We decided to not have a wedding planner. Francois and I were both very involved in the planning. The owners of the venue was also very involved and so helpful.

Maureen Fourie, the co-owner of Herold wines was responsible for all the cheese platters and the delicious custard wedding cake. She also made everyone a breakfast the Sunday morning prior to everyone returning to their destinations

I made all the stationery items myself on the app, Canva.

As our reception was a very informal dinner where we had cheese platters and wine. While we were away to have our couple's shoot, the guests attended a wine tasting to see which wines were to be served at the reception. We used an app to play music as it was such a small group of friends. We wanted the vibe of a casual get together and a celebration of us. No formal speeches or proceedings. Perfect. We did not take dance lessons. We've been dating since we met in Stellenbosch and therefore always "sokkie'd" as students, we danced well together.

In 2005, a new bridal collection emerged and quickly rose to compete with top brands by merging traditional and modern European styles into exquisitely hand crafted gowns.

Cape Town based Wedding and Elopement photographer, documenting love in its most honest forms.