Emile's brother and i worked together on a number of projects leading up to my company using theirs as a preferred supplier, i had to deal with him for any requirements in Cape Town and it got to the point where i refused as he sounded so abrupt on the phone ( turns out that was just how he was on the phone) fast forward 4 years, We were both invited to a mutual friends birthday party at shimmy beach club, Cape Town. On his arrival we shared a super awkward moment and both decided to get a bottle of tequila and champagne for the birthday crowed. At some point he went to the bathroom and one of my friends dared me to kiss him - how can a girl turn down a dare right - As he came out of the bathroom i took his hand and told him i was about to do something and if he rejected me i would possibly have to kill him, i then kissed him and turns out he had wanted to do the same - the rest as they say is history.

We had both come out of really bad relationships with allot of heartache when we first met so we both were very clear from the start that marriage and kids were never going to be a option. I was petrified of feeling that kind of hurt again and believe that people these days do not respect the sanctity of marriage. 5 years later i still felt the same.
On a very random Thursday night, Emile suggested we go for drinks after work at the Oyster box in Durban, something we frequently did so nothing out of the ordinary, we must have been there for about 3/4 hours when he suggested we grab a bottle of bubbles and move out onto the terrace as it was a stunning evening. We were the only people out there, after a glass or two he excused himself to go the bathroom, when he returned he sat down next to me, took my hand and said " u know i love you ( which he will often do ) and i of course responded, i know and i love you too. The next minute there was a box open with him saying " i want you to know how much i love you, you don't need to say yes as i know this was not in the plan, but this is me committing to you, we don't even need to get married" well that was me it felt like 5 years of emotion just rolled out and for about 3 minutes i apparently just cried, he eventually said laughing, while still holding the ring "baby i kinda need a answer", it felt as natural as breathing when i said yes, surprising even myself - after so many years not wanting it i actually wanted this commitment with this special man!. i loved it, it was just the two of us in our most natural state with each other. 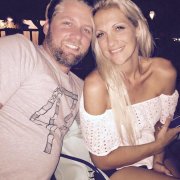