My Cousin and I went out for a drink one night. As we were standing and looking at the crowd, my cousin spot 2 guys walking in. She gave me a hit in the side and said "check the 2 guys at the door". I saw them but couldn't be bothered and went on with my conversations. Mean while the 1 of the 2 guys who walked in saw me, and said to his friend look at the girl with the blue top standing there, but they also did nothing. As the night went by, my cousin asked one of our friends to go and ask the number of one of the 2 guys, which was Francois. Our friend decided to tell Francois that I was looking for his number and Francois gave the wrong number, later that night he felt guilty and came to say sorry and give the correct number. Me not knowing of anything about numbers being swapped or anything gave one look at Francois and did not understand anything he was talking about the numbers. Later on our way home I went to give him a hug and said goodbye have a nice night, he walked me to my car and only then we swapped numbers. We chatted for 2 weeks, until his friend Ulla that was with him the night we met, threatened to brake their friendship if he doesn't ask me on one date . . . we went for that one date and 4.5 years later we are getting married!

Francois came and surprised me one Friday night at one of our horse shows after about a 2 month long distance thing we had going. The Saturday he wasn't himself, but I couldn't give all my attention to him because I was competing myself and the whole family was there to support. The Saturday night after the show he poured me a glass of wine and we all stood by the fire and having a nice family braai. The next moment I heard something cling in my glass and I asked Francois what was in it. He took my glassed poured out the remaining wine and went on his knees infront of the whole family asking me to marry him.

My highlight would definintly be the moment we walked into the receptiin venue as Mr and Mrs.

We went to Kruger national park as we both love wildlife and spending time in nature with just each other was great! 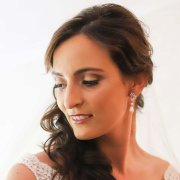 The groom as well as groomsmen wore grey suits from suit hire with white shirts and grey ties. Please first find a tie before choosung a color pallet. I had trouble finding ties

My bridesmaid looked beautifull with dresses that fit both body types. They were dressed in an eggshel color with some lace at the rop

At Jacoba, we make getting your bridal party dresses super easy.

Chalk photography did my photos and beautifull noise profuctions my videos and i am so happy with the memories that caught on film for me.

My mom helped me with my wedding. She got very sick a month before the weddjng being in ICU for 10 days but then my wonderful bridemaids steo in and helpen me organise everything.

My brother got me a vintagr car and then my dad organised me a carriage to enter the venue. My husband i both cone from families that live horses so this was very special.

We had good old boere kos from the venue chef and my cake was by choc n cherry.

My stationary were designed by a best friend of mine who did a graet job. Karoo liefee ontwerp.

We had a luve band at our wedeing and it gave a great partu atmosphere.

At Jacoba, we make getting your bridal party dresses super easy.

Elizabeth’s gowns are the ultimate in femininity, romance and sensuality. She has built an enviable reputation for creating exquisite bridal gowns, using only the best fabrics.