So, funny enough, we met because of Facebook!
One day I received a random invite from Brandon Govender. And you know when you're young, you want as many people on Facebook as possible just to look cool! So I accepted his invite.
I was on Facebook one day and saw that this guy had added a status with his BBM pin, asking people to invite him. So I said, what the heck, let me just make another friend! I invited him.
Apparently, I was his first contact on BBM. So he used to chat to me all the time, asking silly things, like how do you send a BC message, how do you change your profile etc.
Eventually we just spoke as friends. He asked for my number, and he called. Every night. We could speak for hours and always have something to day to each other.
His voice was the first thing I fell in love with.
Not knowing what he looks like though! I would ask him for pics of himself, just to see his face. But he always told me no he hates pictures, and Yes, he really did hate pictures for some reason!
Months after we started chatting, We decided to meet! I worked in Pavilion, so he came during the day while i was at work. We met in the corridors going towards Game. The first time I saw him, I was like oh my gosh you wear gold earrings?! (Obviously not telling him that, but so thinking it). So we chilled outside, he bought me chocolates, spent some time with me and then he left.
He picked me up from work the next day, wearing those coin earrings! I could just die because I hate men wearing earrings. So I said him "You wear earrings?" (Obviously because he was wearing it!) I said "I hate earrings on a guy"
From that day onwards he stopped wearing them! So funny!
We would spend every free moment with each other. He used to work night shift so straight after, he would drive from Hillcrest to Phoenix, bath and so on, then drive to Pinetown to spend the day with me, and go straight to night shift thereafter. We would go to the beach, our favourite spot, grab two sticks and play stick fighting games! We could talk to each other about anything and everything. Our friendship was irreplaceable.
A few months after that, we knew that we loved each other, but was always afraid to say so because we didn't want our friendship to go down the drain should we persue a relationship and it failed.
But we tried in any case.
Our first date was at Mimmos, on the 28th of July 2012. We kissed for the first time that night, outside my home.
This was almost a year after we were friends.
From that day onwards, we were inseparable.

A year after we started dating, on our anniversary, we were going to spend the day with each other. He asked me to dress up smart as we were going to go to a nice restaurant.
When he got home, everyone in the house was so excited for some reason. Taking pics of him and I, then my family taking pics with the both of us. Awfully strange to me. My mum was almost in tears - I just thought she was crazy.
So we jump into his car. He starts the engine. And doesn't drive off...? Sweating for no more. I sled him what happened. He pulls a small box out his pocket and says "I can't wait any longer, it was supposed to be romantic, but I just can't wait! Melissa, would you marry me?"
To me, that was the most romantic thing. It came from his heart. I was overwhelmed with emotion. I said yes!
So, 3 years went by, and as a young couple, we were still finding our career paths. He moved up to Johannesburg, and I started looking for a job there. I started my job in December 2016. Moved in with my friend.
Just before midnight, on the 31st of December 2016. Brandon blindfolded me and his cousin's girlfriend. Now what I knew was that his cousin was going to propose at midnight and we both had to be blindfolded so that she would catch up.
So, I played along, we walked down the stairs at Umhlanga to go to the beach. I stop. They open my blindfold. And there he is, in front of me on one knew, holding another ring and says "the first proposal has expired. it's been 3 years. But this year, 2017, I want to make you my wife. Will you marry me, for real this time?"
I looked around me, we were at the lighthouse. Roses, champagne, a sign board, red overlays on the bench. I was in aw at what he pulled off! I said yes!

The highlight to me was seeing him as I got out of the car. So handsome, and he's all mine!
The next heart warming moment was when he tied the thali around my neck. I now knew that i was his for eternity.
Walking out the temple doors, holding our God lamp in my hands and my husband walking behind me - that moment, was the best moment of my wedding day.

We went to the beautiful Zimbali for 2 nights.
The weather was perfect, we sat at the pool side most of the day, enjoying each other's company, having a few drinks, basking in the ambience.
It was amazing! 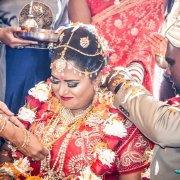 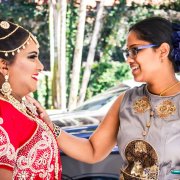 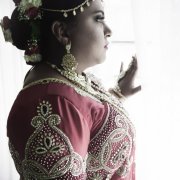 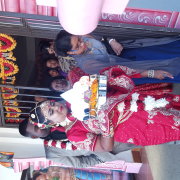 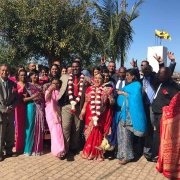 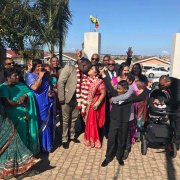 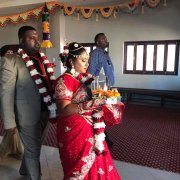 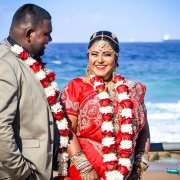 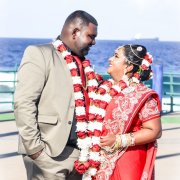 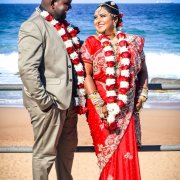 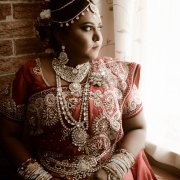 I wore a red silk Saree with swarovski crystals. Light and so comfy! I fell in love with it the moment I saw it!
My stylist was Teeno Perumal from Hairspray. He did such an amazing job. He dresses so many brides but ensures that each bride has a unique look. I went for a contemporary, modern look. Arabic make up and simple flowers in my hair, instead of the traditional long plait that tamil brides wear.
My jewellery, also from Teeno, matched perfectly with my outfit. From the hair piece to the bangles, all absolutely stunning!
I love to be comfortable, and I didn't want to die with pain in my feet the whole day. I can always rely on Rosewood Boutique to have exactly what I'm looking for. I wore a gorgeous gold Indian wedge heel. Mind you I also bought my wedding Saree from them. Affordable and great quality.

The rituals were at the Ganesha Temple in Palmview Phoenix. A very small, intimate gathering. I loved every moment of it.
The reception was at Durban North Conference Centre. My wedding had a total of 60 guests.
Very conveniently situated for all attending.

Yes, I know I was naughty! I didn't really diet much besides cut out some sugar. I really did not have the time (okay I might be making excuses). Planning a wedding in Durban from Johannesburg is not easy!

Pastor Reuben Timothy
This man of God has been a part of the family from the time I can remember! He is such an inspirational leader and a powerful man of God. His wife and him and more like family.

JTG Photography captured or special day.
They are so accommodating and professional. From the little pics that I have seen so far, his work is amazing. I have 2 more weeks to wait for all pics.

nope! All by myself, with the help of my family and my husband's family whenever I needed them.

My dearest aunt made my wedding cake. It was absolutely beautiful and delicious!
The delicious mutton and chicken biryani and soji was prepared by Solly Manjaras

I had custom made gifts for each of my guests. It was a wooden plaque with their name engraved on it and their character or personality trait. And at the bottom was Brandon and Melissa and the date (3rd September 2017). On either side was an engraved design.
On each table I had a powerful word that is the recipe for a successful marriage:
Love
Loyalty
Passion
Happiness
Forgiveness
Prayer
Respect
The wonderful company that did this for us was Nifty Crafts. Excellent service!

We couldn't really have much of a party as I needed to do the last customary occurance of taking my God lamp to my in laws house by 7pm.
But, we had DJ Jovan. An upcoming artist.