The Build-up....right the way Through

Brett (my fiance) & I have Gumtree to thank for us meeting! I had just moved down to Durban from Pietermaritzburg for a new job & didn't know anyone. So being the practical person that I am, I started to a place to stay, after all a girl's gotta have somewhere to call home...I turned to Gumtree - I had originally been looking for a place to stay on my own, but soon realised that I couldn't afford to live on my own, unless it was in a shoebox! So a flat mate it was & since I didn't know anyone in Durban I thought it may be a good way of meeting new people.

I saw Brett's advert on Gumtree & knew THIS was the place I wanted to be! Now Brett being the ever discerning owner wanted to know if I was the kosher type & before I could come see his place asked me a bunch of questions - after all he needed to know if I was dogey or not, haha! Having passed his test we arranged a date for me to come see this place - which is on beach, meeeeep! I also was curious to meet this onwer & suss out the situation (having been to look at a few places already & met my fair share of dogey (old) people already, I needed to see if he was kosher too!). He was so polite & met me at his gate (& I was like WOW, hello! I'd be ok living with you, haha) & walked me down to his flat, chatting the whole way - it was so easy, he made me feel so welcome! The moment I walked in I was sold & thought I could be happy living here - & having some eye candy wasn't going to be a hardship either!

Being the gentleman that he is, Brett offered me some wine (his plan to get to know me better...get some wine in me so I'd drop my guard & show him who I was). Looking round his place took all of 5mins but I only left hours later, having chatted non-stop like we were old friends! I moved in the next week :) Apparently after I left Brett called his older brother & told him that he'd just found the girl he's going to marry! They bet a bottle of Johnny Blue on it...Haha & Brett won :)

We played it cool for the first 3 weeks, but the sparks were flying & neither of us wanted to make the first move - Brett didn't want to chase me away & I didn't want to be THAT girl...So we flirted...then Brett asked me out to dinner saying we needed to get to know each other better...& a bottle of wine was involved...We chatted & chatted...& flirted, A LOT...& nothing happened, he wasn't making his move! So I took the bull by the horns & throwing caution to the wind, kissed him! About 2 weeks later I meet his folks & he met mine the very next day, Brett asked me to be his girlfriend & had bought a bunch of Red Roses to seal the deal...That was almost 4 years ago on Sunday 15 September 2013.

Since then we have had our fair share of triumphs & tragedies & we have always been there for one another, our relationship has gone from strength to strength...& he makes me happy everyday :) We've made loads of memories, had too many adventures & consumed far too much wine...but always together - Brett IS my best friend...

OUR ENGAGEMENT
2 days before my 30th Birthday, on 12 January 2017, Brett got down on one knee & asked me to be his wife! I was completely bind-sided as he had been doing the most EPIC birthday countdown (which was all a ploy) & I had no clue that he had cooked this up! 5 days before my 30th his little gifts started arriving, a bunch of flowers & a card saying I had 5 days to 30th & to celebrate each day :) I was so surprised because I'd been saying that my 30th was going to be a bit of a non-event because our really good friends would be getting married on the same day, 14 January. SO YAY for surprise pressies! With 4 days to go he gave me a beautiful pair of ballet pumps with another little note. 3 Days to go he'd printed out a A4 photo of us & given me a little note to write all my pearls of wisdom - I was so touched! And this countdown was frikkin AWESOME, I felt so special! AND I couldn't wait to find out what the rest of the week had in store! On the morning of 2 days to go I'd been to Gym & was running late for work, so I'd RUSHED home, showered & was getting ready for work when Brett announced he had a scavenger hunt planned (not the most ideal time since I was running late for work & I HATE being late for anything!) He gave me little clues all around the house & it eventually ended on the beach with an 'empty' shoebox...When I opened it there was a beautiful (cryptic) voucher saying I had 2 nights away & to PACK MY BAGS!!! I couldn't believe it! He'd been in cahoots with my boss for nearly 2 weeks & had gotten me time off. My boss had been feeding him information for 2 weeks - as we were going to the wedding I'd decided to spoil myself & get my hair & make-up done & have a spray tan - it was my 30th after all & since I wouldn't be celebrating me, I wanted to at least feel pretty! Anyway I was telling what I was doing, the appointments I'd made & she was promptly telling Brett & he was cancelling everything!
Anyway, I was over the moon excited at having the next 2 days off work BUT he wouldn't tell me where we were going! I had to guess along the way with the clues that we left me...We absolutely LOVE the Bush so I was hoping we were going somewhere in the Bush, maybe even to my most favourite place, the Hluhluwe-iMfolozi Game Reserve...but then we he threw me off the scent by saying I must pack a bikini...Are we going to the beach? But we live at the beach, why would he take me to the beach when we live here? I must have packed in 10mins flat & then our adventure started...I knew we weren't going to our favourite place because we headed in the wrong direction...then we started heading towards the Berg & I got even more thrown off the scent & his clues weren't helping! He eventually told me we were going to a Game Reserve, BUT I needed to say WHICH ONE!
I eventually guessed... NAMBITI PRIVATE GAME RESERVE! I couldn't believe it, I'd ALWAYS wanted to go & now Brett was taking me for my Birthday- how lucky am I?!

We arrived at Cheetah Ridge Lodge to be told by the guide that they had messed up the bookings for that day & had overbooked so we'd be going on an afternoon Game Drive on our own...I didn't mind at all - YAY for us for having a private Game Drive :) We unpacked & had a lovely lunch out on the deck...THEN the heaven opened & we had a torrential downpour that lasted well into the early evening! The rain didn't bother us so we still went on our 'private' game drive. We saw so many beautiful animals & I was just soaking up the whole thing. When we stopped for sundowners (the rain had stopped luckily) at the highest point over the Reserve we hopped out & there was a lovely table set up with drinks & Champers - which I thought was such a lovely touch, still thinking it was for my birthday...I couldn't have been MORE WRONG!! We were admiring the view & the guide was chatting to me about this & that when Brett pulled me a side...We needed to chat...then I REALISED what was going on! THIS IS IT!! I was so excited, I couldn't believe he had arranged all of this for me, to ask me to be his wife!
It was SOOOO PERFECT! Everything just perfect, the setting - in the Bush, OUR most favourite place -, the rain had stopped, we even had a sunset! I felt like the most loved woman in the world! I couldn't tell you what Brett said exactly, I was just so excited & overwhelmed I could barely contain myself! BUT I SAID YEEEEEEEES when he asked me!
It was the most incredible feeling knowing that I'd be spending my life with this most incredible, special, caring, ROMANTIC, man! We were on cloud 9! We celebrated with our guide, who'd conveniently spilled away to give us our privacy & sneakily take photos! And arrived back at the Lodge to be congratulated by EVERYONE there - everyone knew & they had been planning this for weeks! I couldn't believe it! It was SO special! Brett had really gone out of his way to make our Engagement a memorable one! We then had dinner in the private dining room & drank more wine & just soaked up the moment! We then made the phone calls to tell everyone the AMAZING news!!

The rest of our time at Cheetah Ridge was pure bliss! My countdown continued with a massage & pamper with One day to Go...On my birthday I was thoroughly spoilt with more pressies & pressies Brett had got from our families & friends!!!! WOW! We then left to celebrate our friends making that special commitment & to celebrate some more!!

On the Sunday, Brett had one more trick up his sleeve! He had organised a SURPRISE 30th BIRTHDAY PARTY with all our friends & family! That was the Cherry on Top of the most incredible week of my life so far! Sharing our special weekend with family & friends just rounded off the most perfect week & Brett went WAY ABOVE & BEYOND for me!

I am the world's LUCKIEST girl!! 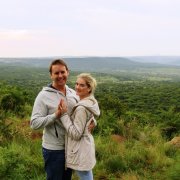 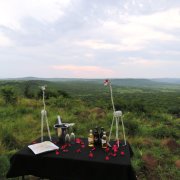 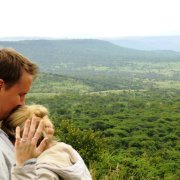 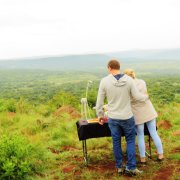 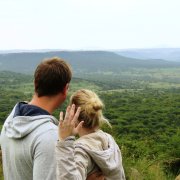 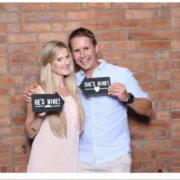