Juron and I met in 2011 coincidently at a friend's party. It wasn't love at first sight for everything about him was irritating. Yet, all I wanted was to be in his presence.

Juron got my number from a friend and we slowly started chatting. The guy I once new as irritating became the guy I couldn't get enough off.

After knowing each other for about 14 months, Juron finally build up the courage to ask me to be his girlfriend. He literally went down in front of me pouring out his love. That was and still is one of my most memorable moments.

What I love mostly about our relationship is the fact that we open and honest to each other no matter what. A rule we had since we started dating was not to go to bed angry. We also became each other's best friend.

We not married yet so the honeymoon did not yet take place.

Our honeymoon is booked and paid for already. We driving out to Citrusdal. I'm even excited just typing about it. 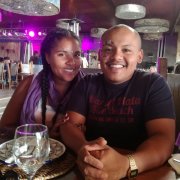 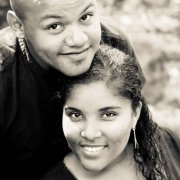 Our marriage officer is our pastor, pastor Pierre Hoffman.

His been a great influence in Juron and my life.