Darren and I met at my Brother's Fiance's 25th Birthday. He had been coaxed into coming and I was there as she was to be my future sister in law. I was watching the rugby with some friends and as he walked in the front door I sat up straighter. I went up to my FSIL and asked her "Who is that?" And her reply was, oh that is Just Darren. Well, he was never Just Darren to me. Darren tells me that he had a similar reaction to seeing me for the first time, and that, according to my grandmother, who is well versed in true love, is something truly special.

Darren and I had plenty opportunity to meet over the course of 5 years. He was friends with my brother's fiancé for 13 years before we met, and 5 years with my brother. Destiny (the theme that seems to follow our relationship) did not mean for us to meet until September 2015, when he was coaxed into coming to my FSIL's birthday. Once we had met at the party we landed up spending the entire evening together, probably being very rude, because we only had eyes for each other. He decided to sleep over so that he could see me in the morning as well. The girls all slept upstairs and the boys downstairs. When I woke in the morning, my first thought was "Oh please let him be as wonderful as last night". When I went down stairs, I saw him, and he looked even better. From there numbers were swopped and the WhatsApps started, and we have been talking ever since.

This is a bit of a funny story. It started in December of 2015 when he started acting a bit strange, but I made nothing of it. Through all of 2016 I kept getting hints that something was up. Then in December 2016, his mom came from Bahrain (She teaches there) for Christmas. The next day his mom and I spent the most amazing day shopping and just getting to know each other, I knew that I would love to have this lady as my Mom-in-Law one day. When he got home from work, at one stage he told me to stay out of the room, which I thought was strange, because I was on my way to the garage. But then I heard his mom shriek for joy (Major alarm bell number one). Then on the Tuesday we were at my Parents for Supper, and we were talking about surprises at Christmas, and I said Darren would be getting the biggest surprise, and my mom blurted "Oh you think so" (Alarm bell number 2). Then during the week my mom kept telling me that I must paint my nails and do up my hair etc for Christmas Eve, using the celebration as an excuse (Alarm 3). Needless to say, I played along. Then Christmas Eve, my Parents put me in the single chair and here I do not really think anything of it, because in my family it is usually my mom and I who have the most gifts to give out. So one by one we started giving and receiving gifts. Darren gave me my first gift, I opened it and it was a Mandala colouring in book. No Ring. Ok, will not be disappointed... then a bit later, he gives me a second gift, this was now a very big, but very light box. Open it up, and its a Emoticon Kissy Face Pillow. No Ring. Disappointed again, I just thought, ok, it's not happening. Then my mom asked if all the gifts had been given out. My brother confirmed yes, then I went to the Tree and looked around, nothing left from me, but I saw a strangely shaped package that looked like a Bicycle Helmut, so I thought it was for Darren for his bike, so ok, nothing from me, and I sit down. Then my mom gets up and fetches the strangely shaped gift and hands it to me saying she doesn't know who it comes from, it just says "Cindy Special". Ok, so I feel it, "Ooo its Squishy", then start opening it, and "Ooo its Fluffy" Then I ripped the rest of the paper off, showed it to everyone and turned it towards me to realise it was a teddy bear from Brown's Jewellers. I took one look at Darren and exclaimed "What did you do???" He then went down on one knee and before he could finish the word ME of Will you marry me? I was just laughing and crying and saying YES YES YES.

Oh my goodness, everything. Best memories though:
The first look with my Bridesmaids, their reaction was full of emotion
Our Vows, which we wrote ourselves. Loved Darren's Vows, absolutely Beautiful with a touch of funny in it
Being Declared Husband and Wife
The photos with the Elephants, that was truly special
Our entrance to the reception area with the Elephants, I will never forget the looks on some people's faces having 3 massive Elephants walk in with us.

We have not yet gone. We are planning it for the middle of September, going to Cape Town for 2 weeks. Few reasons for this, we both had lots of family from overseas, so wanted to spend time with them. We wanted to go for the Hermanus Whale Festival, which has been on my Bucket List for years. And not going immediately after means we will not be exhausted from the wedding. 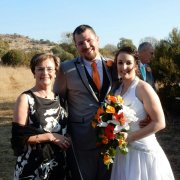 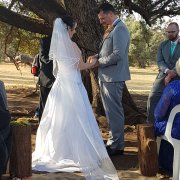 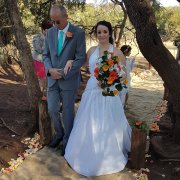 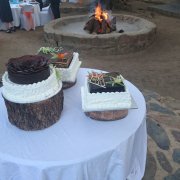 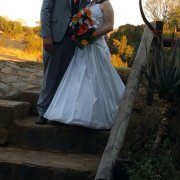 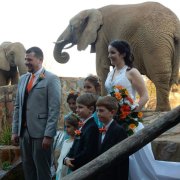 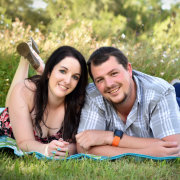 I wanted to be a more casual bride, but sort of didn't happen that way. My Dress was a corset halter neck from GF Couture at Multiflora. It was a satin dress with silver beading (I do not do the lace thing). Makeup was done by my Maid of Honour and Best Friend. Shoes were Pierre Cardin Pearl heels bought from Oriental Plaza. Jewellry was simple, Pandora Bracelet (something Old) which has been built on by my Godmother for a few years now, Cuff Earrings Borrowed from my Maid of Honour, and I kept my signet ring that comes from my Late Great Grandmother. Hair, I tried to keep with the sort of Elvish Theme I seemed to have going (completely by accident) with a hair piece braided over and my hair flowing down my back.

We got married at Glen Afric Country Lodge. It was absolutely magical with all the animals. Guests could stay the night. Most did and we had fun the next morning at breakfast. We almost booked out the entire Venue.

Wow, I kind of went all out here, doing things I had wanted to do for years. I went for Microblading on my Brows, best thing I could have done. I went to Marijke at Nina Belle at Villa Varosi on Christiaan De Wet. I started the Weighless program and lost 5kg. I also started gyming. Just before the wedding I went for a pedicure and a massage for stress relief at Nina Belle and I had my nails done my Sonia Batista in New Redruth, Alberton.

We went really simple here, the natural beauty of the venue spoke for itself. The colours for the wedding were Turquoise and Orange, which added a splash of colour to the African Bush. The Centerpieces were made by my parents. My dad and Darren made the vases from Concrete and my mom and dad put together the arrangements with Strelizia's from their garden and eucalyptus from a friend's garden. The organza on the tables and for chair tiebacks came from CS Events

The Groom wore a Light Grey with Black piping Tuxedo. The Groomsmen wore a Grey Suit. All were rented from EuroSuit. The Groom had an Orange Tie and Orange Rose for a boutonniere. The Groomsmen had Turquoise ties, which my brother tied using the Trinity Knot, and also Orange Boutonnieres. The Boutonnieres came from CS Events.

Bridesmaids I also went simple, I told them I wanted them to have Turquoise Dresses and Long, the style was up to them. We landed up at Oriental Plaza where the 2 Bridesmaids chose the same dress and my Maid of Honour chose one slightly different. They all looked amazing.

Reg Courtney was our Officer. He was fantastic and helped wherever necessary and he added the Sand Ceremony with a smile, even though he had never done one before.

Photographers were the fabulous couple from Jam Photography, Megan and Jonathan. I went to school with Megan, and had seen lots of her work, so she was a natural choice. And the fact she works with her husband, we got a lot more shots than if she had been alone.
Videographer, we used everyone at the wedding, family came over with camcorders and they gave us all the footage they had. Darren is in broadcasting and does Video Editing as a hobby, so he is making our Wedding Video for us.

I planned the entire wedding and loved every minute of it. I have been told I missed my calling. On the Day we had Nikki Stagg from Glen Afric who coordinated everything and the whole day went without a hitch.

We slept over the night before, so unless we consider the Game Drive Vehicle's the Wedding Transport, we didn't have any.

The food was prepared by the venue and they did a fantastic job. The cake was a gift from one of our friends. The cakes came from Patachou, which is a chain of 3 shops started by a French Patisserie Chef. The cakes were an absolute hit at the wedding.

I designed and printed everything myself. My mom helped with the cutting of all the menus, place cards etc.

We had 6 months of Dance Lessons by Warren at Evo Dance in Cresta. He was fantastic and even though on the night the nerves got hold of us and we felt we completely failed, the dance looks awesome on video :-)
Our DJ was Wade Gietl from Big Entertainment. He was absolutely fantastic. I was not an easy Bride, I had requests that required careful planning and timing, and he was spot on every time. He also went the extra mile, when people asked for strange foreign songs, he would look them up and play them for the party. He was fantastic. His Wife, Yolandi was with him and she was taking photos and videos. They came out really nicely and thanks to them we have photos the photographers would not have been able to take.