Dean and I met through a friend, at that time we were both in relationships. Three years later we bumped into each other in China Mall, we exchanged numbers and chatted for a year as friends. He then called me one day while I was at work asking me if he could take me for coffee in my tea break., I agreed and when I saw him he seemed very nervous, their was the coffee in his hand and he officially asked me out. I was in shock and very resistant to the idea but agree, and thereafter our relationship just grew.

This entire day was a beautiful memory for me, spending time with family an friends, seeing some people after a long time and most of all seeing the smile on my parents face and how happy and in unity everyone was.

We went to Midlands Saddle and trout for a week , this was very peaceful and romantic. We also went to La Montagne Resort for a week, which was lovely as we had access to the beach and many facilities. 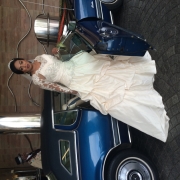 My dress was bought from a bridal boutique, when I saw it I just knew that was the one, I didn't even try any other ones, most amazing part is that it fitted perfectly. Being a winter wedding my sister suggested sleeves. The boutique I bought the dress from did all the alterations for me.

Black, red and gold was our theme. The grooms men bought their clothing from China Mall in Durban . They wore black suits, with black shirts and red waist coats, their suits was lined with a red ribbon. The best man and ring bearer had gold waist coats and gold ribbon their suits.

The bridesmaids were very organized and was given a chance to choose their own design for their dresses. They bought their material from Dubai centre in Gauteng and sewed their dresses in Fordsburg, Gauteng. The maid of honour had gold and the two bridesmaid had red. The flower girls also had red. They all looked amazingly beautiful.

A pastor of the church, Pastor Govender

The car I decided on, was a royal blue Thunder Bird, family car, owned by my late uncle, which was given to his son who was my chauffer for the day.

The preparation of the food was done by Blue lagoon conference centre. The wedding cake was baked by my best friend, as a gift to me .