Ah! Just thinking back to our special day and the lead up to it, brings back SO many memories. ALL of them, the good, the bad and the inbetween. As cheesy as it sounds, the most memorable part of the day and the journey, was finally getting to say "I do" - the vows, the union, the covenant that was made. FINALLY, we were in the same city, for good. After having had a long-distance relationship, the knowledge of being together was (and still is) the sweetest thought.

The night before our wedding, whilst at our wedding rehearsal, my car was broken into and the groomsmen suits' stolen. WHAT A NIGHTMARE. For a moment (or two) I genuinely believed that things were just not going right and it broke my heart. But after being reminding that the day isn't actually about the materialistic, idealistic, romanticised things... Even though my dress arrived 30 minutes AFTER the ceremony was meant to begin, even though my hair ended up just hanging, even though people were upset with seating arrangements and nobody knew there was dessert (and thousands of Rands went to waste)... I STILL GOT TO MARRY MY BEST FRIEND. What?! Beautiful reminders.

We didn't have budget for a honeymoon, as we really did think it was important to spend the money that we did have, on the celebration itself (no regrets.) But my stepdad was awesome and allowed us to stay at his holiday house in Port Owen for a couple of days, just to get away and to finally be with one another. 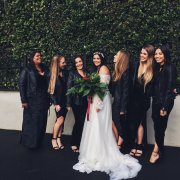 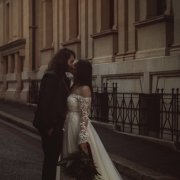 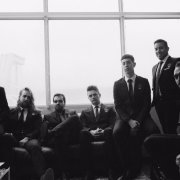 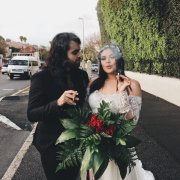 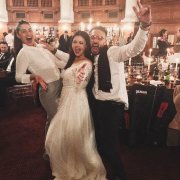 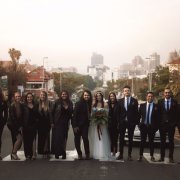 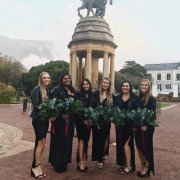 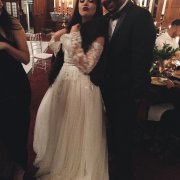 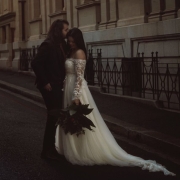 Oh my goodness. HAHA. Where do I begin? I had ALWAYS envisioned my wedding dress, always, since a little girl. BUT my journey with my dressmaker proved to erase every one of those dreams. I went to collect my dress a week before the wedding, and when I got to see it (the dressmaker wouldn't allow me to see it until it was completed) - it was AWFUL. As in, hideous. Thankfully my darling mother came to the rescue and ensured that it was picture perfect by the day of the event. I received it REALLY late on the wedding day, but it was what I envisioned (sort of.)

It's a beautiful, off-the-shoulder dress. The bustier was sparkly (!!) lace, followed by very soft tulle which just fell into a train.

My hair was just loose, middle path and straight. The initial style didn't quite work out, so we opted to just let it be "me."

My makeup was my FAVOURITE part of the look. Gold metallic eyes, bronze cheeks, nude lip in the day (switched to dark lip for the reception.) The wonderful, and extremely talented, Le'Chelle Taylor, worked her magic and you should TOTALLY book her for your next function.

(I forgot to put on any of my jewelry, haha.)

Our wedding ceremony was held in the most beautiful, mountain stone church named St. Barnabas; just off of Kloof Nek in the city.

Our reception was hosted at Centre for the Book; the former National Library of South Africa. (It was breathtaking.)

My main goal for our wedding was to "not die from stress." And I nailed it.

Thankfully I am quite a simple person; so I did not want anything done to the church as it was already so beautiful.

Also thankfully (?) our reception venue is lined with bookshelves, has a super tall ceiling with a massive chandelier and just all round beautiful aesthetics. We had 10 long, dark-wood tables, family dinner style, with perspex Tiffany chairs. We only used greenery on the tables, in both black and crystal vases (dreamy.) Thrown in the mix were LOADS of candles, and some gorgeous, copper elements. Black underplates and white plates finished off the look.

Two of my "other-mothers" who I have grown up around in church, along with my mom and sister, Rene, handled the decor on the morning of the wedding, and they outdid themselves. I went to take a peak before guests had arrived and my breath was taken away.

My husband wore a full black suit and shirt from Zara, with a brown leather tie from WEEF (check them out.) The groomsmen wore black suits with white shirts, and brown shoes.

My bridesmaids wore black, velvet dresses. We had 2 different styles selected, which 3 wore the one style, and the other 3 wore the other. We had them made by a young, up and coming designer called AFARA customs.

Candice Kieser, a long-time friend of mine, my former youth pastor, and the person who introduced me to my husband. We could not have asked for a better person to perform our ceremony. It was perfect.

We had the world's best photographer. Anna Pepper. She was one of our biggest blessings in the season, just as a friend and a support. She made the lead up, as well as the day so memorable.

We also had the world's best videographer, also the world's most hilarious. Aletta Francina. She's out of this world.

My momma was my unpaid planner.

My stepdad and stepbrother drove the bridal party in a Range Rover and a Nissan GTI.

Our church's chef, Jared Pearson catered our food.
Yummi Chef provided macaroons.
Wedding cake was made by Soet in Durbanville, and decorated by the same friends who helped with the reception venue and our flowers.

My husband and I designed and printed it ourselves.

It was indeed a PARTY. It was so much fun. We danced all night! We did not take dance lessons, and the first dance wasn't shabby. We had a two DJ's by the name of Mark and Jarred, which was hilarious as that's my stepdad and stepbrother's names too.

The preferred supplier for many wedding coordinators and wedding venues in and around the Western Cape.