My name is Sarah, and I am 29 years old. I'm half German and half South African, oh and.. I'm also hearing impaired. I was born with a hearing impairment and spent most of my life with hearing aids. Only two years ago, did I make the decision to get cochlear implants.

Gary and I met online through a school friend of mine in 2006. When we first met, there was no interest at all. So over the years we remained in contact and became close friends.
In 2012, I moved from Germany to South Africa. Gary and I then decided to move in together, since we were best friends and both needed a place.. little did we know about the wonderful plans God had for us in store!
We lived together for about two years, before I made the decision to move back to Berlin, Germany to have the cochlear implants done. Throughout the entire time we lived together, I didn't realize that Gary had in the meantime developed feelings for me, or that both our families had been praying for us to get together. So when I moved back to Berlin, he was heartbroken and so were our families. I really had no clue! Everyone, including our friends knew that we were meant to be, except myself. Thinking back on that, I feel so silly for not having seen it sooner.
Towards the end of 2015, I started to have dreams and visions from the Lord that He wanted us together. Now before that happened, I started to develop feelings for Gary, but due to the distance and our longstanding friendship, I was too scared to say anything, plus I didn't know that he had feelings too.
So beginning of 2016, I got tired of fighting my feelings, and I went before God and told Him that if He wanted us to happen, it needs to come from Gary's side.
About a week later, Gary asks me to come onto Skype so we can talk. So as I read that message "we need to talk, can you come on Skype please?" I was obviously nervous. And I knew this was from God.
He then told me how he was having dreams and visions of the two of us getting married, and going into full-time ministry, and how he has had feelings for me for the past 4 years, and is tired of waiting. He wanted to know, if I felt the same or not.
So I knew then, this was my chance to tell him, and after a long talk, we decided that I would come to South Africa for a visit, and we would see what happens between us, and if there was really something.
So in April 2016, I went to South Africa. We had a whole road trip planned, from Richard's Bay all the way to Cape Town.
On April 29,2016, I came out of the bathroom to find a cup of coffee on the table along with wooden fridge magnets in the shape and design of Scrabble blocks. The blocks spelt out the words, "Will U Date Me?"
And of course I said yes!
In December 2016, I moved down to South Africa. And from there, our story began.

The proposal was actually a brilliant idea, and clever if you look into the details of it. You see, when Gary asked me to be his girlfriend, he used Scrabble blocks to ask me to be his girlfriend - so keep that in mind.
So, on February 17, 2017 I decided to go to the stores for some groceries, and little did I know Gary was planning something back home while I was out. So when I returned to the house, there were rose petals everywhere and candles on the doorstep.
On the front door, was a heart shaped sign with the words "17th Feb is your score."
(Remember the Scrabble blocks, the letters "Will U Date Me?" all added up to a total of 17, just like in the game Scrabble.)
I opened the door, to find Gary standing there, our two dogs, one on each side with the same heart sign as the one on the front door. On one dog (Sakura - his dog), her sign said "I need a mommy!" and on the other dog, (Bella - who is my dog), "I need a dad!"
I walked in, and on the table were more candles, rose petals and a big beautiful bouqet of proteas.
He then gives me a beautiful speech about how he is proud and blessed to have me as his best friend, and girlfriend. He then said, "but now it's time to make you my wife." And then he went down on one knee, and asked me to be his wife.
And what made this whole proposal even sweeter, was how the entire time he was kneeling, Sakura kept jumping up to see his hand - in his hand was an old book he found at a shop, and it said "Burns" on it, which is his surname. So I opened the book, and inside was this beautiful ring, and it was the ring that I always wanted.
Each time I wanted to say "yes", Sakura just kept jumping, and Gary eventually said to her, "Saki, down dammit! I'm trying to propose here!"
After laughing, I said yes, and he put the ring on.

I think the biggest highlight of my wedding day is a typical one. That moment right before you walk down the aisle. I stood there in my wedding dress, a nerve wreck, thinking, "oh my goodness, I'm about to get married!" When the doors opened, and I saw Gary standing there, I felt peace and calm.
One highlight that will stay with me forever is that I had two mothers walk me down the aisle. My father passed when I was 18, and last year I met my biological mother. (I'm adopted.) So my incredible mother suggested that both of them walk me down the aisle, my adopted mother on the right, and the biological one on the left. It was truly a beautiful moment.
I also found out last year that I had a biological sister too, and it was a dream come true to have her as a bridesmaid!
Another highlight is all the wonderful speeches and things people had to say about the two of us. I only learned on that day, how much people had been rooting for us to happen, and how many people truly cherished us. The speeches were so moving and truly left footprints on my heart.

We took a road trip down to Jeffrey's Bay - his parents own a beautiful apartment there right on the beach, and lent it to us for the honeymoon. We stayed there for about a week,and visited Gary's family in Port Elizabeth as well. Then we travelled to Knysna, where we stayed for 3 nights. After that, we went on to Cape Town, where we stayed in Melkbosstrand. It was a beautiful, relaxing honeymoon. 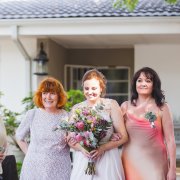 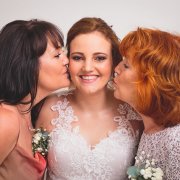 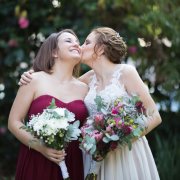 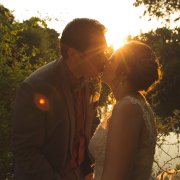 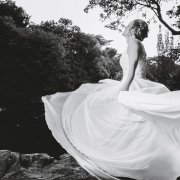 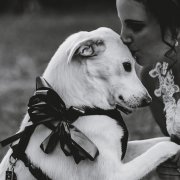 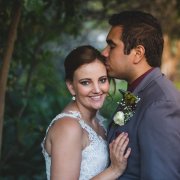 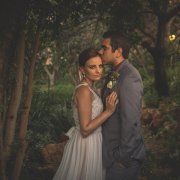 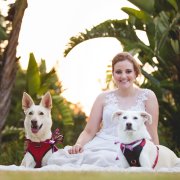 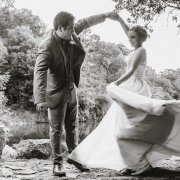 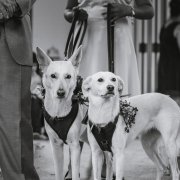 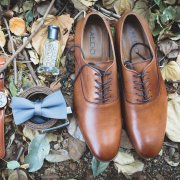 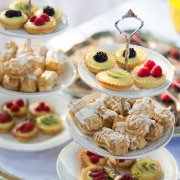 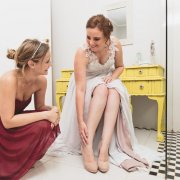 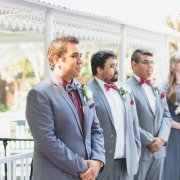 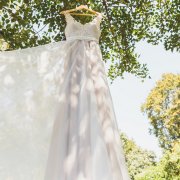 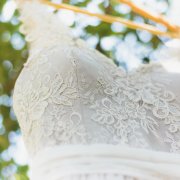 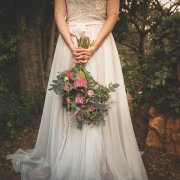 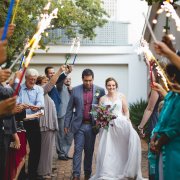 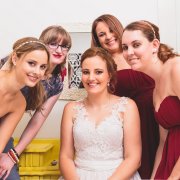 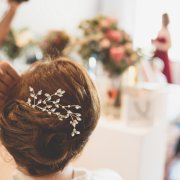 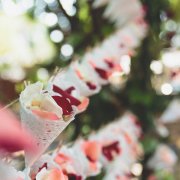 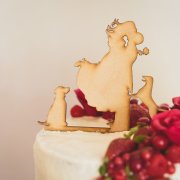 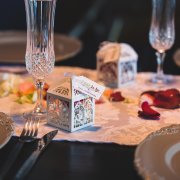 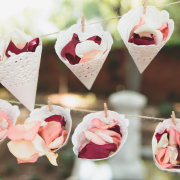 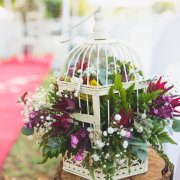 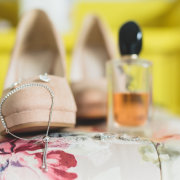 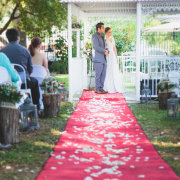 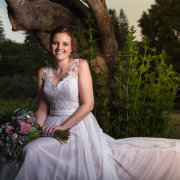 The wedding look was a vintage romance, with a bit of country. So my hair was an updo, with lots of braids, and a simple floral hair accessory. The make up was a smoky look, but very light, to give it a vintage appearance. I had beautiful dangling earrings, round ones, not too long either.
My wedding dress, well I found the perfect one in this shop, but the price was WAY out of my budget.
So my best friend referred me to her sister in law who is a wedding dress designer. I emailed her the photo of the dress I really liked, and she duplicated that exact dress, but also added her own touch. It was truly the perfect dress - the bodice was lace, with lace straps, and the skirt from the waist down was chiffon with satin underneath. The color of the dress was an ivory white, with the satin material in the color of a light mocha.
I had mocha pink heels to go with it, and the lingerie was a beautiful cream lace look. I had no necklace - it would have taken the attention away from the lace of the dress, but a beautiful bracelet from Pandora.

We got married at Vintage Rose Venue, in Waterkloof, Pretoria. it was a beautiful garden wedding, with a country look. Guests did not stay the night, as most of the family that attended stayed with family, and most of the guests lived in Pretoria themselves.

Since the look we were going for was focused on a "natural romantic" look, we had an outdoor wedding. The ceremony took place under a white gazebo, and there were beautiful protea bouqets around it. We had some garden lights around the gazebo, and candles. Leading to the gazebo, was a red carpet, sprinkled with white, pink and red rose petals. On the side at each aisle, were tree stumps, and on top were birdcages with flowers inside. Every second aisle had oriental lanterns with red candles inside.

Our photographer, Conrad Hero Photography - we were their first wedding, so he was very excited to photograph us. We used him before for our engagement shoot. They captured the day beautifully, and even made sure to include our dogs in the photos. They got everyone, and every detail as well. We were truly satisfied with them.

No, the planning was done all by myself, my maid of honor, and mother in law. Of course we had a lot of extra help with the cake, decorations, fittings. My father in law did a lot of the heavy work as well, and I can honestly say that without all that extra help from our families and friends, we would have never gotten the wedding done in time. Nadia Roos, the owner of the venue also helped to coordinate a lot of the details, the furniture, the decor and ceremony.

We actually did all our own stationary. Gary and I designed the invite, place cards, menu, ceremony and thank you's via Photoshop.