How two complete strangers becomes one

This is a story about two complete strangers whereby are total opposite that attracted one another and became one.

Hi, I am Ridwaana. A Psychology student from the South of Johannesburg. My husband is from the South as well.
We were both in high school and my husband would always try to ask me out on a date. However at that time I was not attracted to him and kept on postponing it giving him excuses after excuses. A few would go along the lines of "I am busy" or " I am not at home" or " I am studying". Most of which were lies but I just could not stand him.

Three years later in the year 2015, I started a new job at a company. There came a day where one of our business partners has said that he will send his employee to my house that night to pick up the business card from me. Little did I know that this employee was in fact the boy that has been trying to land a date with me for the past three years.

He was mesmerized. This was the first time that he actually spoke to me in person and he was dumb founded. I kept on informing him about the card pin and what does he need to do with it. However instead of listening to me, he looked at me with an open mouth and upon intervals of me speaking he would in turn ask me " Don't I know you"

Eventually I gave in and said " Yes you do know me". He then started again with the many questions via whatsapp for months after that asking me out on a date and then still would I come up with excuses. Eventually early 2016 did I give in as I was not seeing anybody at that time. I gave in to going on a date with him.

Needless to say I am guilty of judging a book by its cover as he was nothing in person like the person he shown over social media. He was this down to earth, caring, kind hearted man. This was my turn to be mesmerized. IT WAS LOVE AT FIRST SITE!.

After the date he made sure that he made it known that he would love it if this would happen again and it was then that he asked me out. I agreed not sure where would this lead us. But as each day went by the more I fell inlove with him.

All we could ever do was laugh at this.

Needless to say that this has been the best decision I have ever made in my life. He treats me like a queen. He approaches me with so much respect. I am still glad that I did not agree to this three Years ago as everything that is destined to happen, happens in its due course.

And God worked it out so well that he ended up coming right to my house for us to meet. If this is not gods calling then I do not know what is.

My proposal was fairly simple.
In our religion we do not have the big romantic proposals as all others. But this was special in it's own kind of way.

Some people might say that it is too early for this and that we were rushing it but for us it was our time!

He came to me the one day and mentioned that he had a dream of us getting married. He then went on to elaborate and told me that he see's himself married to me and me as his wife. He then proclaimed his love to me, how I am changing him for the better. He has never been this happy in his life until he met me.

And ultimately he does the same to me. I personally feel and think that your soul mate and life partner should be someone that makes you a better person both physically, emotionally and spiritually. They should make you want to be a better person.

Two weeks later, he calls me and says that his parents has spoken to him and made it known to him on how much they liked me and feel that I am the one for him. They then asked him what are his thoughts and how does he feel about me and he told them the same thing he told me. He then told me, " my parents and I would like to come to your parents after your exams in November to ask for your hand in marriage"

I didn't think anything of it as I was on the verge of falling asleep and I told him we will speak about this in the morning.

As I laid my head on my pillow did I have a back flash of what just transpired and there it hit me of the guidance that I have asked for from God.

It was then that I knew 100% that I am making the right decision.

If I had to say the entire day was breath taking.
From my father handing me over and shedding a few tears to me walking down the aisle and seeing my husband look at me with his jaw dropped and full of love.

It just so happened that all of our plans got rushed.

I am the last born in my family and both my elder sisters was married prior to this. We originally supposed to get married 4 years later once I finished my degree, however my dad fell extremely ill and was in and out of hospital. We then had to move the wedding right up to April as he was not certain if he would even see July this year.

Based on that decision we moved it up. At the point of moving it up we were left with only a month to plan everything and did not have time for alot of things. Some items and functions had to be cut out because of this.

Due to this we did not go on a honeymoon and instead spent a few days away from work in our new apartment bonding with one another and trying to wrap our heads around this.

It has now been 4 months later since we have gotten married and it has been amazing. We compliment each other so well with our personalities. I could not have asked for a better partner! 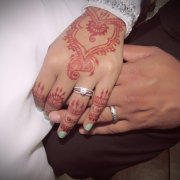 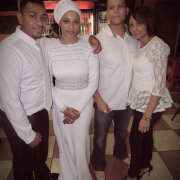 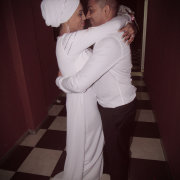 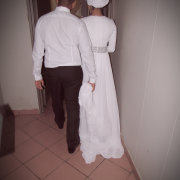 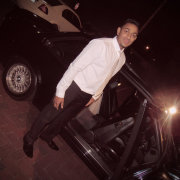 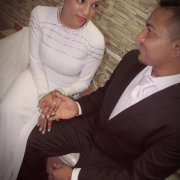 I have a very unique style. I wore a head scarf and put it up in a turban. Embellishing it with a purple flower and a silver diamante head piece to make it stand out.

I had long silver earrings on to compliment it as well.

My dress had a lot of diamante's on it as well and for this reason i did not wear a chain or a bracelet.

My dress was a form fitting mermaid dress with a long flowy chiffon trail, Diamante's around the neck, chest area, waist and around my wrists.

My shoes were silver sandles that crawled up my foot embellishing my foot and had diamante's on the heel as well.

I had my dress made from scratch from a dressmaker in the South named Zaakirah. She did my matric ball outfit and she is great with her hands.

I am not a make up person as per say but my make up was done by a girl by the name of Raeesa. I really take my hats off to her as she listened to my every request making sure that i stood out but at the same time do not have alot of make up on me.

I got married in Lenasia at a local Masjid (Church) and thereafter had the reception at a restaurant in Lenasia as well. Over all everything was simple and had so much of blessings.

My wedding venue was centralized therefore my guests did not have to stay the night. However my sister from Durban stayed by my parents

Believe it or not, I did nothing of this.

There was no time as mentioned above however the day before I treated myself to a full manicure and Pedicure with gel over lays at a salon in Melrose.

Thereafter went to a local spa in lenasia to do my waxing.

I then went home to do a herbal facial and put on my Hanna.

My decor was white, silver and Plum

we had white plates with Glass under plates.

A stunning vintage garden themed bench for my husband and I to sit on.

With lovely flower arrangements as the center pieces.

My husband did not have any groomsman, neither did I have bridesmaids.

He wore a black firm fitting suite with a white shirt and white tie and a black shoe.

He got his Suit from Mayfair in Johannesburg

As mentioned above I did not have any bridesmaids

Our Photographer was my best friend from childhood.

She took such amazing photo's and made sure that she captures each and every special moment. From getting ready, to all the tears to even the function the day after.

I did not have a planner

My friend took me to the wedding venue in a Mercedes that complemented me in every way.

The next function we went in a bmw

The food for the wedding was done by the restaurant called Taste of India, the next day function was done by a local cook.

Our weddings are very different. We don't actually have any music at our weddings