Myself and Jean-Pierre met in a pub whilst I was visiting a friend that worked there, I had noticed him sitting with a friend and my friend told me that it was his birthday so though I didn't ever buy a guy a drink I bought him a drink to say happy birthday, I delivered it to his table, he looked up said thanks and carried on talking which I thought was rude so I left it, I came back to the bar about a week later and he was having a drink after work, another person had been sitting next to him and was talking his ear off so my friend told JP to move over to my side and chat to me instead, we spoke for hours and went home separately, we chatted on the phone over the next few days, we went to movies but nothing romantic, then I invited him over for dinner and a movie, we watched movies till 4am and from there our love grew, and he moved in.

His proposal is quite an interesting one, we went to Thailand for a holiday, however before this we had spoken about marriage even looked at a few rings, and he had said he would propose just not sure when, everyone had said to me that it would be in Thailand but he told me I must put that out of my mind because its not happening, so I did. On the 27th April 2016 we went to Bangkok to the top of a 34 story sky bar called above eleven. JP was so nervous it was incredible that day, I assumed it was because he was petrified of heights, he gulped down a cocktail and 2 beers and finally started to calm, the view was magical and there was very little lighting at the sky bar so you can appreciate the lights in the view, at one point of the evening JP had snuck a 'brown' Browns box in front of me but due to the lighting and the table being brown I didn't see the box for about half an hour, once seeing it I was a little confused but it sunk in what it was as that's the ring I loved when I tried it on. I then told JP that he has to do it properly and get on one knee even though he was so afraid of heights which he did. He then proceeded to tell me that he asked my dad for my hand in marriage literally the day before we left.

I have to say all of the wedding was memorable, we didn't have anything go wrong due to having the most amazing venue and organisers, everyone had fun. The only funny part was that the lady that did my nails did them so long that when it came to putting JP's ring on I couldn't get it on.

We did go on honeymoon, we went back to Thailand and on the 27th of April 2017 we went to the same sky bar the same floor same table and celebrated the day this journey started. We went up as a couple, came down engaged, and went back up married. 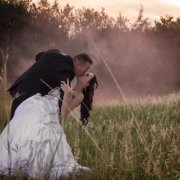 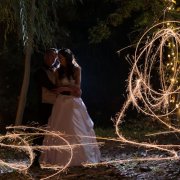 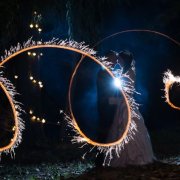 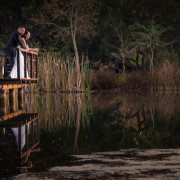 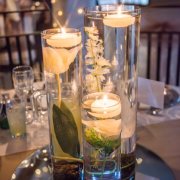 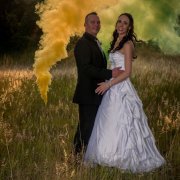 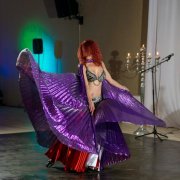 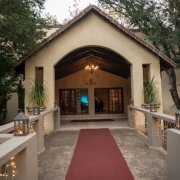 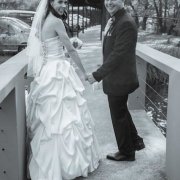 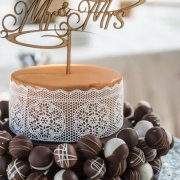 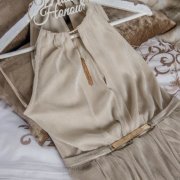 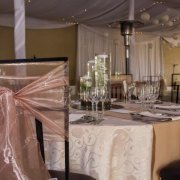 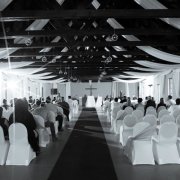 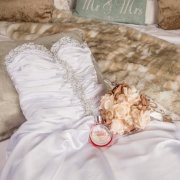 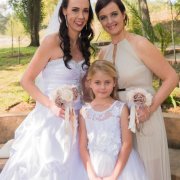 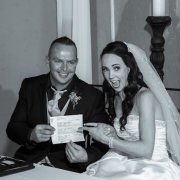 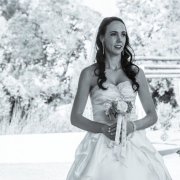 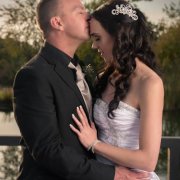 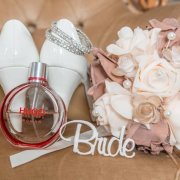 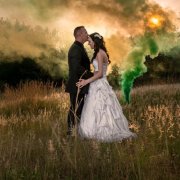 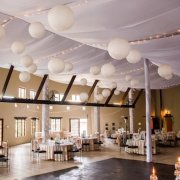 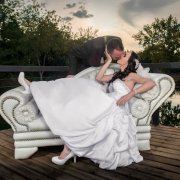 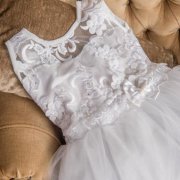 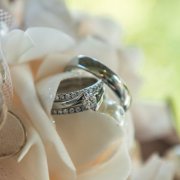 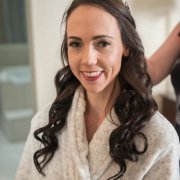 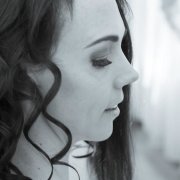 Due to me being incredibly slender, for one day I wanted to be fat so I had a ball gown made for me, my hair was a half up half down look with loose curls, my makeup was darkish but still natural, my shoes were white with a small heel (I LOVE high heels however my hubby is short), my lingerie I wore for a secret photoshoot right before I put my dress on as a gift to my hubby. my jewellery was made by my dressmaker so it matched my dress. and my garter was my mothers that was 35 years old.

We were married at Gecko Ridge in Pretoria, the venue was beyond what we could have asked for, the owner and organiser are amazing and they make sure your day runs without a glitch. We had family and friends stay the night and were given the most amazing breakfast the next day.

I stopped going to gym so that I would not loose any weight and not fit into my dress or gain any muscle and also not fit into the dress, I went for laser hair removal and facials, eyebrow tinting and shaping.

My husband and I luckily have the same view on less is more, we didn't go overboard with the décor, my mother in law made the table runners and chair backs, we bought fake flowers (which no one knew the difference) from China mall, we had the flowers in vases filled with water and a floating candle, also colour changing LED lights, we had a unity candle, a Mr & Mrs on the main table with some tea lights. The venue was beautiful enough. Our theme was natural.

The groom and best man bought their suits from China mall in JHB, sounds cheap but all that was cheap about those suits was the price, they were lovely, we even bought JP's son a little suit from there, then the waistcoats we hired from Eurosuit.

I had 1 maid of honour, we got her dress at Truworths, I was lovely and comfortable because I wanted her to feel comfy, it was a champagne colour, short dress with a long netting over it.

Our marriage officer was Juan, he was so down to earth and a biker which is right down out alley. Our ceremony was around 12 min long like we asked but included what we asked for.

Our photographer was Nadine Botha also known as Nadine Leboop, she is amazing, she and her helper for the day Steven, made magic in capturing the love between us, they focused on us and not so much everyone else, we had another friend with a camera also taking pictures of all the people.

other than being guided by the venue we did everything ourselves

The venue did the food and the cake was done by Misfit Munchies, that lady can make anything I tell you. We had an unusual cake as the bottom half was pop cakes in 3 flavours and the top was a small cake which we cut, it was brown and cream with edible lace

That would be me, I used to be a graphic designer so that was easy.

We had a DJ given to us by the venue that was amazing and then we had a singer and a bellydancer.