The Journey of Louise & Michael

Michael & I met February 2005. We used to work for the same Pharmacy back in Nelspruit (Mpumalanga) and had some the best connection two people can have, however, we were both in a relationship and we never "took things to another level".

Facebook was a new thing and like everyone, we befriended each other on Facebook in 2007 and we made contact with each other and never spoke again until 2011. He got divorced 6 months into his marriage, however, I was still married. We made contact again in 2014, I just started with divorce proceedings myself and soon both realized that the connection is still there.

I got divorced and we arranged to meet each other and since then, I moved to Durban to be with Michael. We got engaged on my birthday which is 3 May and decided to rather utilize any funds towards a wedding to have a fabulous honeymoon. We eloped on 17 December 2017 and will soon be jetting off to Bangkok and Phuket for the most romantic holiday/honeymoon ever.

Well, seeing this was a second wedding for us both, we decided to elope. We kept it a BIG secret, no one knew.

Without all the trimmings and stress, we casually eloped with close friends on 17 December 2017. We'll utilize the funds one would spend on a wedding to buy a house and go on the most romantic honeymoon ever. 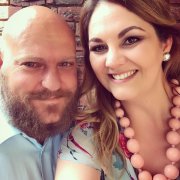 Well, we didn't do all the fancy trimmings so this might bore you but here goes:-

We got married in Amanzimtoti, private venue. Because we eloped, we had no guests, only our two witnesses.

I only coloured my hair :-)

We had none. I had one flower which was a Protea.

Michael wet to Woolies and got a shirt similar in colour to my dress :-)

I had no bridesmaids.

Our very best friend who is a Pastor in Toti.

Our witness who is also a "starter photographer" did all the happy snaps, nothing fancy.