Being in the same profession. we would constantly see each other around but never actually spoke to each other, usually just a smile on the odd occasion.

It so happened that he happened to be a friend of a family member and when I needed information for a work related matter, I was pointed in his direction. We very gradually became friends and eventually realised that it was obviously meant to be more than just friendship. However, as fate would have it, we were of two different religions and this became a minor obstacle.

So a few years, many compromises and a lot of perseverance later.... Here we are!

Knowing him as well as I do, I had a feeling that something was coming.

It started as a normal trip to Ushaka marine world, visiting the aquarium and watching the Dolphin show.
It was then time for supper and we had 'luckily' been able to get a table at the Cargo Hold restaurant without having booked prior.

During the starter I noticed the manager run towards the shark tank. I then asked my fiancé what was happening and he said he thought they were cleaning the tank or feeding the Sharks. 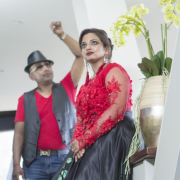