BLIND DATE
(noun)
a Social engagement with a person one has not previously met or arranged with a view to the development of a romantic relationship.
"she met her husband on a blind date"

The above pretty much sums up how we met.
Thankfully I can say that it was not one of those dates were I wished I was actually blind, quite the opposite!
We had a blast of a night, connected instantly and the moment the night was over I just knew that this time, it would be different.

a Social engagement with a stranger, now arranged with the view to spend the rest of our lives together.
"I met my husband on a blind date"

This is not your typical "romantic" proposal.
I suppose most women have a pretty summed up explanation of what their idea of a "perfect proposal" would be, and, well this, this is mine.
I'd warn you, it is a rather long story, but definitely worth reading!

20/05/2017 -
Mine, I'd describe as the most imperfect, perfect proposal.
We were on a weekend getaway with both of our parents and some family.
The day he proposed, was a day before our year anniversary.
We had hiked later that afternoon, and afterwards started to prepare the food ("braai"). I took a nice, long relaxing bath. My dearest husband does not really have a concept of when to keep his clothes clean, so I still "shouted" at him, through the window, that he should not wear his nice t-shirt whilst making the fire, as is was meant for tomorrow. He insisted that I hurry up, and eventually after I was done, I tied my hair up into a bun (which automatically makes me look like 12 years old!), jumped into my solid, pink (not attractive looking at all) Onsie with my blue polka dot slippers and headed down. Ironically I told him "well, you'll have to see me like this anyway one day when we get married" and laughed it off.
My sister started acting strange with the camera, and the next moment he took my hand, asked me come and look at something around the corner and he dropped down onto one knee.
I definitely did not think I'd get proposed to in this horrible looking Onsie, (in his defense, we had a stunning background of the sun setting against the mountains), but it was worth every second of it.

The moment we both had talked, discussed, joked about and finally anticipated arrived. I would not change a thing if I could, because that moment is one we would never forget and it was all imperfectly perfect.

Wedding Venue -
Umbali Lodge made sure we had a very special day from morning till night.
They also supplied us with very good meals.

Wedding Cake -
We had a standard cream, one tear Bar One Chocolate Ganache cake, with additional Vanilla cupcakes, as well a white chocolate dipped Cake Pops.

Hair & Makeup -
I was assisted by my great stylist and friend, Edwin Chirgwin.
My makeup was done by Chantelle from Solanique, another amazing stylist.

Wedding Dress and accessories -
The dress comes from D&G Bridal.
A semi low cut, boob tube, mermaid, vintage looking dress. Off white in color with gold lace and diamante lining.
Standard wedding shoes to match the dress, and my "something old" would be my Matric Farewell jewelry.

We had the pleasure working with Jolians Photography who strangely followed us around all day and night, and managed to capture amazing photo's of it all!

As well as someone named, John Tilly and his assistant from DesignFlow whom flew all over our heads like little fighter jets and recorded the entire wedding, making sure we do not miss a moment.

One order of Side Car Motorbike.

Voting has closed for the 2017 competition! 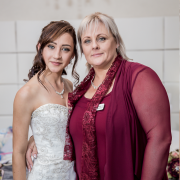 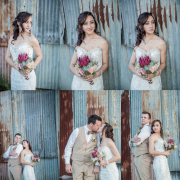 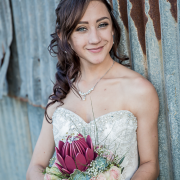 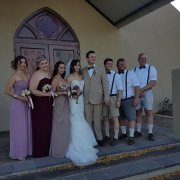 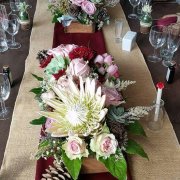 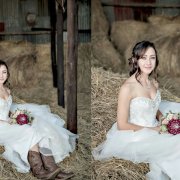 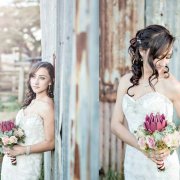 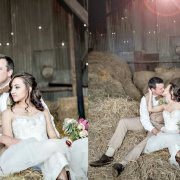 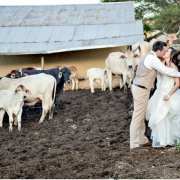 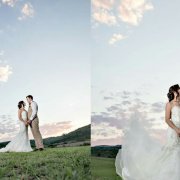