Most love stories entail a guy chasing a girl. But how many of them can say that LITERALLY happened? :)

At the Knysna half marathon on the 12th July 2014, Alisha & Roan eagerly lined up at the start line deep within the cold and slightly gloomy forest. Some of Alisha's friends had made a last-minute decision to not run that day & hence she was quite happy to see Roan's familiar face amongst the crowd and asked if she could join him and his mates to set off together. Roan was only too happy to say yes but was soon to realise his complete and utter underestimation of the situation at hand. Alisha had craftily belied her innate running talent by sweetly uttering an innocent "Please don't wait for me if I'm a bit slow, just run ahead." Shortly after the start gun, the truth was revealed however as Alisha bid her adieus to the "slow starters", plugged in her earphones and cranked up the pace by bounding past other participants on the shoulder of the forest road.

Roan suppressed a smirk as he thought to himself "No worries, I'll definitely catch her in a while..." Funny how quickly expectations of triumph can change to desperation. At about the 14km mark, with not an inkling of Alisha in the pack ahead, Roan began picking up the pace considerably. Fellow runners cast bewildered glances as Roan shot past, probably thinking to themselves that he should have set his alarm earlier that morning if he wanted to be with the racing snakes, rather than pushing from the back. Little did they know he was a man on a mission. A mission, sadly, that he was destined to fail. The next he would see of Alisha would be her Cheshire-cat grin on the other side of the finish line where she had been waiting for him for about five minutes! 0_0 (Garth's cackle of laughter adding insult to injury!)

Had it been a movie, queue Katy Perry's 'Dark Horse' as the back-track and Roan just had to find out more! It didn't take long for him to learn of Alisha's kind & compassionate nature and Alisha was clearly drawn to Roan's swarthy & sophisticated charms ;) A true meeting of kindred spirits that has flourished from a friendship to a deep and mutually-respectful love. The rest, as they say, is history! :)

The entire day was incredible, so tough to choose the highlights. If I had to choose, it would have been walking down the isle with my dad and seeing the man of my dreams in the front of the chappel with tears in his eyes. The most wonderful walk ever to meet him with the same tears in my eyes :)

Yes we did! It was a complete surprise. We went to 3 different destinations in South Africa. The first one was Nkomazi Lodge, where we stayed in tented camps, another level of glamping with a bath outside and your own little splunge pool, right next to the river. The second place was Camp Shawu in the Kruger, where we stayed right on the watering hole, and could see all the animals come to drink water whilst lying on our bed. And then finished off our honeymoon at Leapord Creek, absolutely stunning experience with South Africa and Safari living. 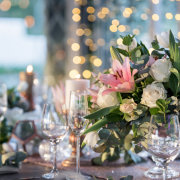 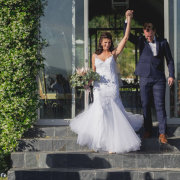 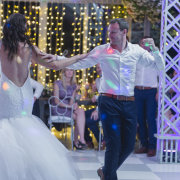 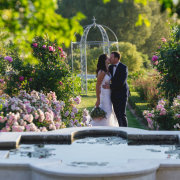 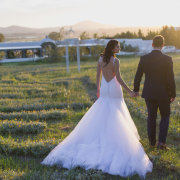 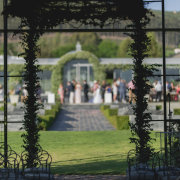 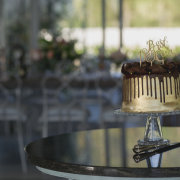 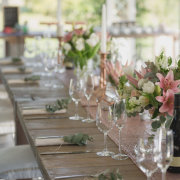 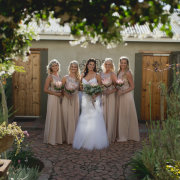 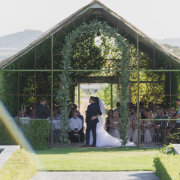 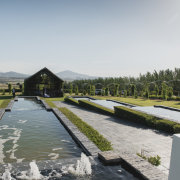 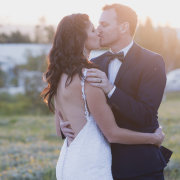 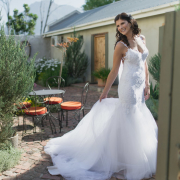 My dress by @RobynRoberts was absolutely beautiful, and made exactly as I pictured it, with a beautiful open back, sequenced body and beautiful long train. With the dress being the feature, I had simple rose gold earring and bangle from Swarovski and flat shoes as I am tall already.

My make-up and hair done by @Lyndal Fitgerald with smokey eyes and curls.

We got married at Belair, South of Paarl. The most beautiful and fairytale looking venue, with Jasmin growing everywhere inside and outside. Our guest had the luxury of staying at their BnB accommodation.

Our decor was simple but elegant with our favourite flower the King Protea, matched with pink and white roses and white tulips. The tables had rose gold sequence runners, flowers and naked bulbs hanging from the roof, giving it a romantic feeling.

We used the very talented John-Henry Bartlett who made us look like magazine models.

Pauline Schreuder Catering provided the food of the day, all our guest complemented on the food and couldn't get enough of it. Pauline and her team went out of their way and even suprised us with coffee cones to finish off the meals.

Our cake was from Cake Velvet co, and was said to be the best wedding cake ever!

We made all our own stationary, and kept the invited digital to save the trees.

We used Rolling Audio, who were absolutely excellent and kept the dance floor going at all times. We even had to extend the time as we were having so much fun.
My husband and I didn't practice our first dance at all, we probably should have but luckily he is such a good dancer and it was absolutely perfect.

The Best Entertainment, Sound and Lighting for your special day!

The Best Entertainment, Sound and Lighting for your special day!