My husband and I went out to the same place to go dancing, with separate friend groups. I however knew his friends that he had gone with and one of our mutual friends introduced us knowing our love of cars. We talked for a few minutes and then parted ways for the rest of the night. As the night came to an end I was on my way down the stairs as he came up. He then asked if I was leaving, to which I replied yes. He then asked if I wanted to see his car before I left (he had a 2.5L 300bhp Ford Focus ST - My absolute favorite) and I said "I'd like that" - I asked him to show me someday. We got to the car and he let me get in and see the interior and all that (I'm a bit of a car junky haha) I then got out and he asked if I wanted to go for a spin? Of coarse I was thrilled and agreed and went to the passenger side. He stopped me and asked if I didn't want to drive? My first thought was "This guy is crazy" for 2 reasons: 1} He is letting a girl drive his car and 2} He just met me that night and he is letting me drive. But i didn't mind I was getting to drive my favorite car!!! On the drive he could not stop talking to me and asking me questions about myself. He was really friendly and nice. After we came back I went inside the dance place to get my keys and phone which I had left with my friends, when they asked me where I had been. I told them and they were speechless,shocked and amazed (They knew George very well). Apparently he has never let any one drive in his car let alone drive it themselves, and he was an extremely quiet person, not really saying much unless you asked him something (That should of been sign ;). The next day I sent him a message saying thank you for the spin and we never stopped talking since that day.

So I am not a very romantic person, but my husband sure is!! Bonus!! He planed a weekend away in Cape Town for our 10 month anniversary. We watched an outdoor movie at the Galileo Open air cinema on the Friday and then went camping in Melkbos that night. The next morning we had breakfast at Moyo in Big bay, and was followed by sight seeing and fun activities. Neither of us had ever been on Table Mountain so he Got us tickets and just before sunset we went up. As we were standing on the edge by the little pathway wall, I wanted to take some photo's of us. I gave my camera to his sister (Yes he made sure the event was photographed ;) and when I reached the spot which I felt was pretty, I turned around to call him over and he was down on one knee. With the sun setting in the background he asked me to marry him. I never let him finish and kissed him, because I was overwhelmed and we had a laugh about him wanting to put my ring on. Everyone on the mountain the started clapping and whooping. we then went out for dinner at a fancy restaurant at the Waterfront. The next day we went for an amazing picnic in Kirstenboch botanical gardens and a movie after that. We both new from the start that the other person was our forever person.

~ I would say definitely our first dance. We were planing on doing a Rumba, but i found an amazing song 2 weeks before the wedding - oops - by accident. I played it to him and we both loved it. Only problem is that we couldn't just Rumba on it. So to my surprise he agreed on doing a Contemporary duet with me to Take my Hand.

~ Our cake that my husband made himself! It was Delicious!! And our guests couldn't get enough.

~ My dress. My mother made it from 5 or 6 images I showed her of different dresses, with no pattern, and hand embroidered our initials on the back of the dress

~ The decor. George and I hand made all the decor together.

We went on a road trip to the Garden route area. We started in Wilderness and went all the way to Jeffrey's bay. Doing different activities everyday and just seeing new places and just spending time together as husband and wife. 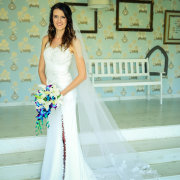 My wedding look was very natural, as I am not a girly girl type. I did my own hair and make-up, My mom made my wedding dress as I said before. my shoes was pieces of lace on my feet ( seeing as I almost never wear shoes, only shocks and bear-feet) My garter was made by my mom and had the words "Remove before flight" hand sown onto them ( George and I have a mutual passion for aviation as well. The lingerie was bought by my mother-in-law (we are really close) My bouquet had Blue Galaxy Orchids and Casa Blanca's. and I had on my mothers bracelet and neck less bought by my mother- in- law and very simple teardrop earnings.

We got married at Kronenburg Wine Estate in Paarl. We had arranged accommodation for all who wanted to stay in the Paarl area.

I didn't really have a specific regime. I tend to try and eat healthy all the time and stay fit as much as possible. I try and take care of myself always not just for specific occasions. :)

The decor was all self made. I'm not really a flower person so I made roses out of sheet music (I love music) Our seating chart was laser cut Fighter plane aircraft silhouettes, one for each table. We had a lot of fairy lights and sparkles. The furniture and draping was the venue's. Our colour scheme was Mint, Navy blue and Silver. Our confetti was small paper jets with our initials on them.

My husband had on a 3 piece grey suite with a navy tie which he got at Eurosuite, and the two groomsmen had black suites and navy ties, that they had. They all had mint pocket squares. And George had F16 Jet cuff-lings that I bought as his wedding gift.

They both had mint cross over top, half circle dresses on that my mother made. They decided on the dresses themselves and then gave the picture to my mom.

It was my mothers, niece's husband. Whom is our pastor and family that we found on the West coast after my mother had not seen her niece for almost 30 years. It was very special because my moms niece carried her into the church when she was a baby and now her husband wed us.

No, my husband was very supporting and involved in all the planning and preparation.

We did not feel the need to hire any fancy car as no one would of seen it.

The venue made our amazing food and my husband made the wedding cake himself.

I did all the designing and printed at our friends Print Shop.

The party was amazing!! We love to dance so everyone was on the dance floor all night. Our friend was our DJ (DJ Wallie) and he did an amazing job of keeping everyone happy and catering to everyone's needs. we did not take dance lessons, I have been dancing since I was 3 (My mother is a dance teacher) And my husband was a very fast learner. So I choreographed our contemporary dance and he learnt it within 2 days, which was good considering we only started 2 weeks before the wedding. My husband is amazing.