Vote for Amy Waller with SnapScan

Jason and Amy started their first chapter early in 2012 when they began dating at the start of Grade 11. Back then it was passing love notes in class, regular Milky Lane waffle dates and staring love struck across the classroom at each other waiting for the final bell to go off so they could hold hands on the way home, a highlight that made the school days worthwhile.
Their story began on the 2nd of January and 6 years later they shared their 6th anniversary on a plane, which was the start of their adventures in South East Asia. The start of these adventures began with a bit of a bumpy start in Thailand; moving in together in a country that didn't speak much English was a challenge, however this experience created such strong bonds and memories it was all worthwhile. Their adventures consisted of exploring most of their delicious foods, befriending as many locals as possible and elephant sanctuaries that left them in awe for months after, of course the whiskey buckets also deserve a mention. Next was Japan, with its breath-taking parks and scenery, Bali with its luscious jungles and golden beaches as well as Cambodia and its rustic simple charm. We won’t mention Laos because who even knows Laos exists.

Nearing the end of 2019, the couple said their heart-breaking goodbyes to Thailand and all the families who had welcomed them not only into their homes but their lives. Even their “personal” Tuk-Tuk driver shed a tear as he bid his last goodbyes, giving them a toy tuk-tuk to be their child’s first toy. After a pitstop in South Africa for Christmas, the pair were off, yet again in January, with their heart set on explorations in South America. However, due to some unfortunate circumstances their plans were cut short, allowing them to only explore Buenos Aires (an exquisite blend of contrasting resemblances; meaning European Art Nouveau architecture could neighbour a graffiti covered street).
When it was decided that homeward bound was the plan, Jason could just not let the engagement ring hidden in his luggage arrive back home and not on his Pookie's hand. So he pushed for a day trip out to the stunning little colonial town on the coast of Uruguay called Colonia Del Sacramento. After a sunny day walking the picturesque cobblestone streets, the day ended with a sunset on the ocean, as a background to Amy saying Yes to a kneeling Jason. 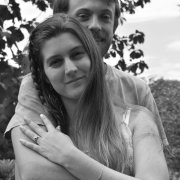