We are both from Nigel, but he lived in Nigel town and I lived in the location called, Alra Park.
According to him, he saw me with my mom in town and saw me through a window, his words to his friend were "that is going to be my woman". In 2010 December we met. He drove up to me, called me aside and asked for my number. I had a boyfriend at the time so we were only friends. We lost contact for almost two years. He randomly contacted me in 2012. He said that he didn't have time to fool round, so I had to decide there and then that we a couple...and almost 7 years later, we still together, have a baby girl, Nolitha who is a year old ( who also happens to share a birthday with Daddy) &...getting married soon.

Absolutely my kind of perfect.

Shame he had so many hiccups that he was determined to do it there and then, without a ring. I was given the opportunity to chose my ring on Saturday. I chose a silver ring from the Chete' range...hence my surname will be Chete. 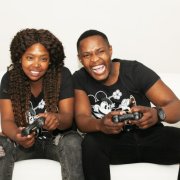