We were friends at first (for about a year and a half), until with one lunch together, we looked at each other with different eyes. It was the weirdest thing that happened all at once and at the same time. Unfortunately I was still in another relationship, which I then ended to be with the love of my life, my soulmate.

We were in Plettenberg bay for a week holiday. We even sky jumped. We are very adventurous. He proposed when we went on a hike at Plett Point. It was BEAUTIFUL. It is almost like hiking on the side of a mountain, with the ocean on the left side, as far as you can see. Out of breath, we reached a deck area and took photos. Then I saw him taking out his drone and flying it around. The drone went lower and lower and then he stood infront of me and asked me whether he can ask me a question, to which I giggled and nervously said no. He anyways went on his one knee, accidently took the wrong hand and asked me to marry him. He barely finished his sentence to which I then replied with a clear YES! The drone took a video of the whole proposal :) 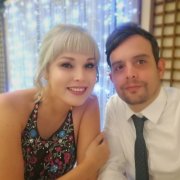