A cowboy and an Indian: A transcontinental love story

Jacob and I first met over 3 years ago at a tiny bar in Songtan, South Korea. We were both a long way from home with him being American and with me being South African. Both of our jobs brought us to South Korea and would eventually take us away again but I'm getting ahead of myself. We met at a friend's birthday party. I felt a tap on my shoulder and turned around to find the most gorgeous man I had ever laid eyes on grinning at me. He drawled in that sexy country boy accent that he thought I was beautiful and asked my name. I promptly panicked, I think I uttered what could have been my name and then ran away. I. Kid. You. Not. I have no flirting game. Maybe it was my leopard print shirt that brought out his hunting instincts because he decided to pursue. He asked a mutual friend to talk to me so I wouldn't run away again and the second introduction went much smoother. We had our first date a few days later where more hilarity ensued. He got lost trying to find my small rural town. After us both taking a few buses, we eventually found each other and spent the next 5 months falling in love. Eventually however I had to return home as my teaching contract had ended. We decided to give long distance a go because we weren't ready to let each other go. I traveled to Alaska where he was based (he was a firefighter in the United States Air Force) and he traveled to South Africa. We met each other's families and friends and over time cemented each other in our lives. He's an old fashioned country gentleman and insisted on asking for my hand in marriage from my grandfather, my biological father and my stepfather. My grandfather gave us his blessings just days before he passed away. I'm so grateful that my grandpa got to meet Jacob. They are the two most important men in my life. Jacob proposed to me at the highest pub in Africa, in Lesotho on top of a snowy peak. It was so beautiful. We decided to get married at Tala Game Reserve. It was the first and only venue we saw. It was perfect. We both love the outdoors and nature. We have had a long journey to get to "I do" but we have brought together two races, two countries and two families with our love.

Make Up & Hair: Makeupnthingz by Reena. 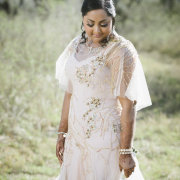